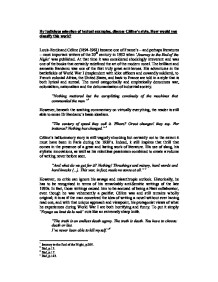 By judicious selection of textual examples, discuss C&amp;eacute;line&amp;#146;s style. How would you classify this work?

By judicious selection of textual examples, discuss C�line's style. How would you classify this work? Louis-Ferdinand C�line (1894-1961) became one of France's - and perhaps literatures - most important writers of the 20th century in 1932 when 'Journey to the End of the Night' was published. At that time it was considered shockingly irreverent and was one of the books that certainly redefined the art of the modern novel. The brilliant and sarcastic Bardamu was one of the first truly great anti-heroes. His adventures in the battlefields of World War I (resplendent with idiot officers and cowardly soldiers), to French colonial Africa, the United States, and back to France are told in a style that is both lyrical and surreal. The novel categorically and emphatically denounces war, colonialism, nationalism and the dehumanisation of industrial society. "Nothing mattered but the earsplitting continuity of the machines that commanded the men."1 However, beneath the scathing commentary on virtually everything, the reader is still able to sense Dr Bardamu's basic idealism. "The century of speed they call it. Where? Great changes! they say. For instance? Nothing has changed."2 C�line's hallucinatory story is still vaguely shocking but certainly not to the extent it must have been in Paris during the 1930's. ...read more.

Nothing remained but shimmering dread."6 Nietzsche and Conrad had already guided us towards the depths of darkness, but with C�line a completely different view is taken, there is nothing to be positive about. Indeed, according to C�line, once you have discovered truth, life is over. However, he writes without a whisper of the adolescent self-pity. His vision is bleak but large, and confers on him a freedom, which allows him moments of penetrating human sympathy as well as startling commonplace enchantment. "In the European cold, under grey, puritanical northern skies, we seldom get to see our brothers' festering cruelty except in times of carnage, but when roused by the foul fevers of the tropics, their rottenness rises to the surface (...). It's a biological confession. Once work and cold weather cease to constrain us, once they relax their grip, the white man shows you the same spectacle as a beautiful beach when the tides go out: the truth, fetid pools, crabs, carrion and turds. Once we had passed Portugal everybody on board started unleashing his instincts, ferociously."7 Baradamu is the icon of a disenchanted generation. He forces any and everyone who reads the book to get in touch with his/her inner nihilist. ...read more.

There is simply nothing about the book that is conventional unless one counts the simple fact that it is printed on paper! More than sixty years after publication, it still has the power to shock. Celine portrayed the Great War as an event of insane mutual slaughter lacking any meaning or significance, symbolising to his mind the total worthlessness of humanity. The ambivalent reactions to the cataclysm of the Great War, the perceived need to endow it with a personal, collective, or ideological meaning, and the desire to integrate the slaughter into a comprehensible scheme of universal or individual progress, is at the root of our century's obsession with perpetrating and representing violence. "The only arguments we could have pitted against all those wielders of power was our contemptible little wish not to die and not to be burned alive. Which didn't amount to much, especially when you consider that you can't come out with sentiments like that in the middle of a war."15 Through his irreverent 'Journey to the End of the Night', C�line adds his voice to others who feel it necessary to make a clearer statement or at least be able to bring the larger political overlay to the perspective of one person, who in this case was Bardamu. ...read more.