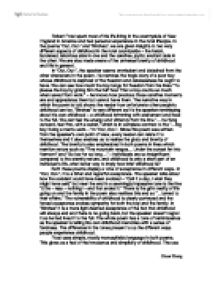 By looking at 'Birches' and 'Out, Out-' by Robert Frost, compare and contrast the ways in which the poet conveys the theme of childhood.

Robert Frost spent most of his life living in the countryside of New England in America and had personal experience in the rural lifestyle. In the poems "Out, Out-" and "Birches", we are given insights to two very different aspects of childhood in the rural countryside - the harsh, burdened, laborious side in one and the carefree, joyful, exultant side in the other. We are also made aware of the universal brevity of childhood and life in general. In "Out, Out-", the speaker seems omniscient and detached from the other characters in the poem. He narrates the tragic story of a poor boy whose childhood is deprived of the freedom and carelessness he ought to have. We can see how much the boy longs for freedom from the lines "To please the boy by giving him the half hour That a boy counts so much when saved from work." - he knows how precious those carefree moments are and appreciates them but cannot have them. The narrative way in which the poem is told shows the reader how unfortunate other people's childhood can be. ...read more.

- and that ended it." There is the grim reality of life going on and the family in the poem also realizes this and so "...turned to their affairs." The vulnerability of childhood is clearly portrayed and the forced acceptance evokes sympathy for both the boy and the family. In "Birches" it is a more light-hearted acceptance of the fact that childhood will always end and there is no going back, but the speaker doesn't regret it as he had lived it to the full. The whole poem has a tone of reminiscence as the speaker is telling his own childhood memories with a sense of fondness. The difference in the tones present to us the different ways people experience childhood. Frost uses simple, mostly monosyllabic language in both poems. This gives us a feel of the innocence and simplicity of childhood. The use of colloquial language also enables us to understand the universality of childhood experiences. Enjambments give a sense of the continuous and cyclical nature of life and is used both poems alongside caesural pauses which serve different purposes. ...read more.

In "Birches" it can signify the child's rhythmic swinging from the birch trees and gives a sense of freedom. This simple rhythm parallels also with the simplicity of the language and therefore echoes the universal straightforwardness and naivety of childhood, no matter whether it's burdened with work or careless and full of play. The poems are all dramatic monologues. The speaker tells the story by himself but it's very different in that in "Out, Out-" he is telling the story of another boy but in "Birches" he is remembering his own childhood. In "Out, Out-" this allows the reader to conjure up their own feelings and emotions and the lack of the boy's own point of view gives us a sense of his helplessness. In "Birches" the monologue helps the reader to understand and relate to themselves the wonders of childhood since the speaker is talking about his own experiences - "...I once myself a swinger of birches" - and we can easily conjure up memories of our own. These two poems give two completely contrasting aspects of childhood. It's difficult to compare them as the contents are so different but I think that "Birches" is a much more enjoyable read with its vibrant imagery and more positive tone. ?? ?? ?? ?? Chuer Zhang ...read more.