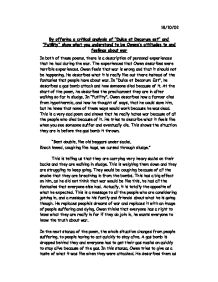 By offering a critical analysis of &quot;Dulce et Decorum est&quot; and &quot;Futility&quot; show what you understand to be Owens's attitudes to and feelings about war

18/10/02 By offering a critical analysis of "Dulce et Decorum est" and "Futility" show what you understand to be Owens's attitudes to and feelings about war In both of these poems, there is a description of personal experiences that he had during the war. The experiences that Owen describes were terrible experiences. Owen feels that war is wrong and that it should not be happening. He describes what it is really like out there instead of the fantasies that people have about war. In "Dulce et Decorum Est", he describes a gas bomb attack and how someone died because of it. At the start of the poem, he describes the predicament they are in after walking so far in sludge. In "Futility", Owen describes how a farmer dies from hypothermia, and how he thought of ways, that he could save him, but he knew that none of these ways would work because he was dead. This is a very sad poem and shows that he really hates war because of all the people who died because of it. He tries to describe what it feels like when you see someone suffer and eventually die. ...read more.

He wishes that he could just stop the whole thing and not let it happen again. He tries to convince us that war in not what you think it is, but much worse. He is mad that all of this is happening, he is not thinking about defending his country any more, and he is more concerned about his survival. Another one of Owens poems, "Futility", describes another death, the only difference is that the person is already dead when he finds him, and he probably died from hypothermia. 'Futility' describes his feelings more when he sees this dead body. The dead body is a soldier that used to be a farmer who lived in France. They wish that they could save him. He is thinking that maybe the sum may help the dead soldier, or wishing that it could. He was thinking that the sun might warm the soldier up and save him. He starts to describe what the soldier would have done in the morning before he became a soldier, when he used to live on a far in France. He said that in the morning, the sun would always wake him up, and he would start work, he thought that if the sun always used to wake him then, it might wake him now. ...read more.

This proves that Owen is against war and those people who advocate it. He wants the war to stop and to never go into war again. Owen has mixed feelings about war, and this confuses him sometimes, it is as if he is dreaming, for example, in 'Dulce et Decorum Est' "In all my dreams, before my helpless sight" This is telling you how he feels, he is saying that it is worse that any nightmare that he has ever had, and that it is so unbelievable, he thinks that he may be dreaming, or wants it to be a dream so that he can just wake from it and it will all be over. Here's another example in 'Futility'. "Think how it wakes the seed" He thinks that or is dreaming that the sun will wake him like it does the seeds that he once grew. In both of these poems, he wants it to be a dream so as he can wake up and none of it would have happened, because it is so terrible. Owen wants us to realise that war is wrong and that it should not be happening, because of all the people that suffer from it. ...read more.