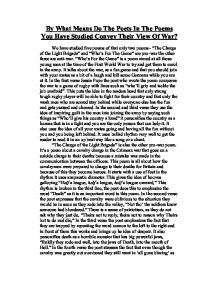 By What Means Do The Poets in These Five War Poems Convey Their View Of War?

By What Means Do The Poets In The Poems You Have Studied Convey Their View Of War? We have studied five poems of that only two poems- "The Charge of the Light Brigade" and "Who's For The Game" are pro-war the other three are anti-war. "Who's For the Game" is a poem aimed at all those young men at the time of the First World War to try and get them to enrol in the army. It talks about the war, as a fun game and that you should join with your mates as a bit of a laugh and kill some Germans while you are at it. In the first verse Jessie Pope the poet who wrote the poem compares the war to a game of rugby with lines such as "who'll grip and tackle the job unafraid". This puts the idea in the readers head that only strong tough rugby player will be able to fight for their country and that only the weak men who are scared stay behind while everyone else has the fun and gets praised and cheered. In the second and third verse they use the idea of inspiring guilt in the men into joining the army by ...read more.

The next poem is I called 'Disabled' and it is written by Wilfred Owen. It is a poem about a man that served in the war that has lost his all his limbs. In the first verse he talks of "his ghastly grey suite" this is a suite that he would be made to wear it because it has been specially made for him without any limbs. It goes on to say that he hears the boys playing like used to before he became disabled and this saddens him, "Voices of boys rang saddening like a hymn." He looks forward to the nurse coming to him and putting him to bed to blot out his sorrow and take him away from this world, "Till gathering sleep had mothered them from him." In the second verse he goes back to before the war and talks about how he used to swing and swagger down the street on a Saturday night in the town. Now he knows that he will never be appealing to girls again and now they touch him with no love or care but just purely professionalism and no passion or attachment, "Girls' waists are, or how warm their subtle hands; all of them touch him like some q***r disease." ...read more.

In the poem the soldiers finally get to the German wire the poet and the poet write of them lying down like the dead listening to the Germans, "We lay in the shelter of the last dead man , ourselves as dead,". At the end of the poem they get back to the trench past all the dead corpses "and through the wire and home, and got our rum," rum being the reward for doing what they did. Out of all the poems I think Disabled by Wilfred Owen is the most hard-hitting and moving. It talks about touching him like a "q***r disease". It is similar to 'Drummer Hodge' as it stresses the fact that there is no reason for these wars and these innocent lives to go to waste. I think 'The Charge of the Light Brigade' and 'The Night Patrol' are also similar as they both tell a story about a group of soldiers. Even though one of them is anti-war and the other one is pro-war. I think that 'Who's for the Game' is on its own because it is written by a woman that has no experiences of war like the other poets. By Joe Sharp ...read more.