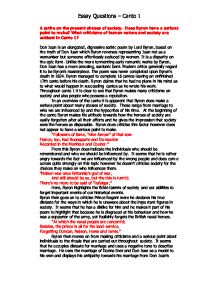 Byron - A satire on the present abuses of society?

Essay Questions - Canto 1 A satire on the present abuses of society. Does Byron have a serious point to make? What criticisms of human nature and society are evident in Canto 1? Don Juan is an elongated, digressive satiric poem by Lord Byron, based on the myth of Don Juan which Byron reverses representing Juan not as a womaniser but someone effortlessly seduced by women. It is a disparity on the epic form. Unlike the more tormenting early romantic works by Byron, Don Juan has a more amusing, sardonic bent. Modern critics generally regard it to be Byron's masterpiece. The poem was never completed upon Byron's death in 1824. Byron managed to complete 16 cantos leaving an unfinished 17th canto before his death. Byron claims that he had no plans in his mind as to what would happen in succeeding cantos as he wrote his work. Throughout canto 1 it is clear to see that Byron makes many criticisms on society and also people who possess a reputation. In an overview of the canto it is apparent that Byron does make a serious point about many abuses of society. These range from marriage to who we are influenced by and the hypocrites of his time. ...read more.

He also presents the marriage of Donna Inez and Don Jose as one of distrusts and neglect with a lot of conflict between them as Donna Inez seemed to be out to get him into trouble. "And let few opportunities escape Of getting her liege lord into a scrape." Byron gives the impression that he has a tongue and cheek attitude toward the marriage of Donna Inez and Don Jose. This is perhaps a declaration of his bitterness toward the failure of his own marriage and his attempt to inform society of the consequences of marriage. "T is pity learned virgins ever wed With persons of no sort of education," He then goes on to criticise the hypocrisy of marriage by saying that it makes you lead an unhappy life and that the only way you are to be happy is by your partner being dead rather than divorce. "Don Jose and the Donna Inez led For some time an unhappy sort of life." The opinion Byron presents towards marriage is harmful and its negative aspect allows him the ability to make a serious point about the unhappy lifestyle that marriage brings to couples and that shows how he believes marriage is there to be criticised. ...read more.

This is yet again another fatal flaw for human nature which is highlighted and criticised by Byron. Byron then returns to his first task of criticising certain individuals. He refers to the Lakers and makes direct attacks about how they go back on their words due to their stance as a powerful writer. It seems that he does resent these writers for doing so but does not fully condemn them like he did in his Dedication. "To strife; 't is sometimes sweet to have our quarrels, Particularly with a tiresome friend:" He then makes reference to humans as being inheritably sinful. This can be seen an approach to the subject of sin in mankind and is a parade of Byron's Calvinism upbringing and his belief that he has the authority to denounce others for the way in which they conduct themselves and the many sins they interact in. This is yet another example of Byron's criticisms in the first canto. "'T is pity though, in this sublime world, that Pleasure's a sin, and sometimes sin's a pleasure; Few mortals know what end they would be at..." Towards the end of the canto Byron again adopts the preference of his influences and the people who we should be influenced by. ...read more.