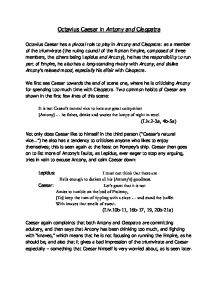 Octavius Caesar in Antony and Cleopatra Octavius Caesar has a pivotal role to play in Antony and Cleopatra: as a member of the triumvirate (the ruling council of the Roman Empire, composed of three members, the others being Lepidus and Antony), he has the responsibility to run part of Empire, he also has a long-standing rivalry with Antony, and dislike Antony's relaxed mood, especially his affair with Cleopatra. We first see Caesar towards the end of scene one, where he is criticising Antony for spending too much time with Cleopatra. Two common habits of Caesar are shown in the first few lines of this scene: It is not Caesar's natural vice to hate our great competitor [Antony] ... he fishes, drinks and wastes the lamps of night in revel. (I.iv.2-3a, 4b-5a) Not only does Caesar like to himself in the third person ("Caesar's natural vice...") he also has a tendency to criticises anyone who likes to enjoy themselves; this is seen again at the feast on Pompey's ship. Caesar then goes on to list more of Antony's faults, as Lepidus, ever eager to stop any arguing, tries in vain to excuse Antony, and calm Caesar down: Lepidus: I must not think that there are Evils enough to darken all his [Antony's] goodness. ...read more.

Caesar: Doubt not, sir, I knew it for my bond. (I.iv.83b-86) This short dialogue, containing some quite harsh-sounding phrases for people are that are meant to be friends, shows that there might be a small rift growing between these two men, in addition to the disagreements between Antony and Caesar. Lepidus asking for information about what is going on, from Caesar shows that there might be an issue of a lack of trust developing, whilst Caesar's rebuttal of "doubt not, sir, I knew it for my bond," shows that Caesar could be losing patience with Lepidus, who is always portrayed as being quite a weak and unimportant character anyway. The meeting between Antony and Caesar in act two becomes very tense, even though Lepidus does his best to keep it peaceful: "what's amiss, may it be gently heard. I earnestly beseech [you to] touch your sourest points with sweetest terms." Caesar does not heed his fellow triumvir's advice, and starts accusing Antony that: if you there Did practice on my state, your being in Egypt Might be in question (II.ii.44b-46) Obviously, accusing someone who is meant to be an ally of trying to usurp your position is bound to cause a big ...read more.

He is amazed and bemused at Antony's description of a crocodile to Lepidus, the latter of which is extremely drunk, accepting things like: "it's shaped like its self," and "it moves with its own organs" as being good descriptions of the crocodile. We next see a suspicious Caesar warning Antony not to mistreat Octavia; Antony assures Caesar that "you shall not find... the least cause for what you seem to fear." Caesar also asks that Octavia would be as good a wife as he hopes she will be. Octavia then becomes teary, and, in a rare moment of compassion, Caesar consoles his sister, before wishing her and Antony well and leaving. In contrast to the previous scene, when we next see Octavia, Caesar acts quite callously, after he learns that his sister has left her husband, being more concerned about what she looks like at how others will view her, rather than her emotional state: You come not Like Caesar's sister. The wife of Antony Should have an army for an usher. (III.vi.43b-45) All of the above shows, I believe, that Caesar, despite being a powerful and gifted leader, is quite a cold, calculating and callous character. ?? ?? ?? ?? ...read more.