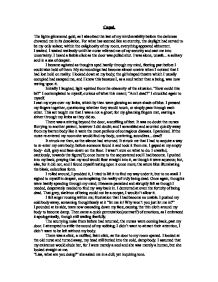 Caged - I pressed my fingers together, questioning whether they would touch, or simply pass through each other. This act taught me that I was a not a ghost; for my gleaming fingers met, casting a shiver through my limbs as they did so.

Caged. The lights glimmered gold, as I absorbed the last of my invulnerability before the darkness drowned me in its desolation. For what has seemed like an eternity, the daylight had served to be my only solace; within the caliginosity of my room, everything appeared abhorrent. I waited. I waited restlessly until the nurse relieved me of my security and cast me into uncertainty. I heard a feeble click as the door was pulled shut. I was alone, unsafe... a solitary soul in a sea of despair. I became agitated as thoughts sped hastily through my mind, fleeting past before I could take hold of them. My surroundings had become almost oneiric when I noticed that I had lost hold on reality. I looked down at my body; the girl shaped theatre which I usually occupied had escaped me, and I knew this because I, as a soul rather than a being, was now resting upon it. Initially I laughed, light-spirited from the obscenity of the situation. "How could this be?" I contemplated to myself, curious of what this meant; "Am I dead?" I chuckled again to myself. I cast my eyes over my limbs, which by then were glowing an azure shade of blue. ...read more.

I pushed my cold body away, screaming thoughtlessly at it "let me in! Why won't you just let me in?" I pounded at its side, tears now cascading down my face, causing the thin cloth around my body to become damp. Then came a quick permutation(contrast?) of emotions, as I embraced it apologetically, though still wailing fearfully. The scurrying noise from before had returned; the nurses were coming back, past my door. I attempted to stifle the sound of my sobbing; I didn't want to attract their attention, I didn't want to be left without my body. There was a click, a muffled, faint click, as the door to my room opened. I looked at the old nurse and turned away, my head still buried into the cold, damp body. I assumed that my existence would elude her, for I were merely a soul and she was merely a human, but she looked straight at me. "Lisa, what are you doing?" she asked me in a dull, yet inquiring tone. I gripped the body tighter and began to cry harder. "Lisa, I asked you, what are you doing?" her voice remained calm and professional, but her expression had become hostile. ...read more.

I considered refusing, but I recognised the futility of such an action and let her place the tasteless pills in my mouth, one by one, washed down with a mouthful of water. The two nurses kept a tight hold on me, whilst I watched the third dispose of the cup from which I'd drank. She then walked over to my body. I felt dazed, confused. Was it common to see a soul separate from a body? Was I truly crazy? I watched, as even more strangely, the nurse bent down and then sat on my body; just sat. "What are you... Why?..." I couldn't articulate a sentence. The room had become hazy and bleak, and before I had chance to say any more, I drifted helplessly into a deep sleep. *** I awoke, my head was screaming and the burning bright lights blazed upon my retinas, causing me to blink uncontrollably. I then remembered my body, and looked across the room. I thought they'd taken it, it was gone; there was just a bed, a bed with grey sheets which were now torn with what appeared to me fingernail marks. I ran my own pink fingers across them, noticing that the material was slightly damp. Without another thought, I left my room in search of new sheets. All was forgotten. ...read more.