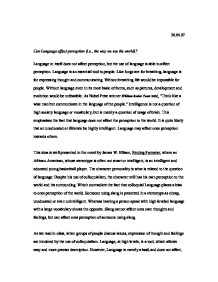 Can Language affect perception (i.e., the way we see the world)?

28.04.07 Can Language affect perception (i.e., the way we see the world)? Language in itself does not affect perception, but the use of language is able to affect perception. Language is an essential tool to people. Like lungs are for breathing, language is for expressing thought and communicating. Without breathing life would be impossible for people. Without language even in its most basic of forms, such as pictures, development and evolution would be unfeasible. As Nobel Prize winner William Butler Yeats said, "Think like a wise man but communicate in the language of the people." Intelligence is not a question of high society language or vocabulary, but is merely a question of usage of brain. ...read more.

Whereas hearing a person speak with high-leveled language with a large vocabulary shows the opposite. Slang cannot affect ones own thoughts and feelings, but can affect ones perception of someone using slang. As we read in class, when groups of people discuss issues, expression of thought and feelings are hindered by the use of colloquialism. Language, at high levels, is a tool, which allows easy and more precise description. However, Language is merely a tool, and does not affect, in the literal form, ones thoughts. In the example we received in class, two people using similar language are likely not to believe in the same things, or share common feeling about the same issue (i.e., one may believe in God whereas the other may not). ...read more.

The major cause to the difference in thought is the surroundings and conditions. The rich nobles, being in a "better of" state than the poor, regarded themselves as better and therefor did not deserve to be taxed. "Man invented language to satisfy his deep need to complain." Lily Tomlin. Language affects nothing but expression. Language is only a tool, which helps or hinders expression and thought. The use of colloquial language hinders the capability to express oneself to the fullest. Knowing many languages and being able to communicate in many different ways helps you to be understood and to organize your thoughts and feelings. "In Paris they simply stared when I spoke to them in French; I never did succeed in making those idiots understand their language." Mark Twain ...read more.