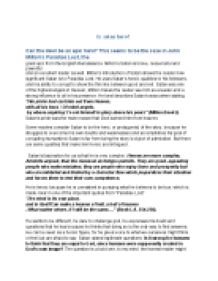 Can the devil be an epic hero? This seems to be the case in John Miltons Paradise Lost

﻿Is satan hero? Can the devil be an epic hero? This seems to be the case in John Milton?s Paradise Lost, the great epic from the English Renaissance. Milton?s Satan is brave, resourceful and powerful and an excellent leader as well. Milton?s introduction of Satan shows the reader how significant Satan is to Paradise Lost. He uses Satan?s heroic qualities to his followers, and his ability to corrupt to show the thin line between good and evil. Satan was one of the highest angels in Heaven, Milton makes the reader see him as a leader and a strong influence to all in his presence. He best describes Satan?s ways when stating, ?His pride/ had cast him out from Heaven, with all his host. / Of rebel angels, by whose aspiring/ To set himself in glory above his peers? (Milton Book I). Satan?s pride was the main reason that God banned him from heaven. ...read more.

The question is a bold one, to my mind the honest reader might secretly admire that Satan was courageous enough to ask God this question. Book II of Paradise Lost by John Milton reveals some of Satan?s heroic characteristics, especially when contrasted with God. As ruler of Hell, He does? t fight because he is evil, he does? t fight for fame, he doesn?t fight for hate. Satan strives for equality and fairness. He fights for a cause that he believes in, and fighting for a just cause is a very well known measure of heroism. In Book II of Paradise Lost, Satan calls his band of rebel angels to decide how to fight against god.. He asks his followers, ?[B]y what best way?Whether of open war or covert guile,/We now debate; who can advise, may speak? (Book II, ll. 40-42). because none of his followers volunteer, Satan Is ready to battle against god by himself. ...read more.

Before I finish my presentation I want to compare Milton?s Satan to Dante?s Satan. Dante?s Satan has no heroic qualities at all. He is an ugly brute, not able to move. he is nothing more than a mere negation of God. So why I compare this two Satan each other. In medieval centuries , the role of the devil was still very clearly defined. He was pure evil and Dante placed him in his Hell. As for Milton?s Satan maybe its romantic period that rises so many question about Satan heroism. readers in the Romantic period were influenced by the period they lived in. Readers admired him for his pursuit of liberty, individualism and determination, which became popular themes at the end of the eighteenth century. From my point of view Satan can be described as a free spirit and it?s seems there is no boundaries to his freedom. He is able to bear the weigh of impossible pain and suffering while still moving forward and fighting for what he believes in. And still this is a question which we can?t answer directly yes or no. ...read more.