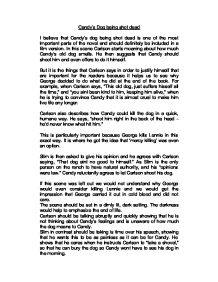 Candy's Dog being shot dead I believe that Candy's dog being shot dead is one of the most important parts of the novel and should definitely be included in a film version. In this scene Carlson starts moaning about how much Candy's old dog smells. He then suggests that Candy should shoot him and even offers to do it himself. But it is the things that Carlson says in order to justify himself that are important for the readers because it helps us to see why George decided to do what he did at the end of the book. For example, when Carlson says, "This old dog, just suffers hisself all the time," and "you aint been kind to him, keeping him alive," when he is trying to convince Candy that it is almost cruel to make him live life any longer. ...read more.

If this scene was left out we would not understand why George would even consider killing Lennie and we would get the impression that George carried it out in cold blood and did not care. The scene should be set in a dimly lit, dark setting. The darkness would help to emphasize the end of life. Carlson should be talking abruptly and quickly showing that he is not thinking about Candy's feelings and is unaware of how much the dog means to Candy. Slim in contrast should be taking is time over his speech, showing that he wants this to be as painless as it can be for Candy. He shows that he cares when he instructs Carlson to "take a shovel," so that he can bury the dog so Candy wont have to see his dog in the morning. ...read more.

He says, "What the hell you laughin' at?" and punches Lennies face making his nose bleed. Lennie is described as being 'too frightened to defend himself." But under the instruction of George, Lennie grabs Curley's hand and cannot let go, even with George slapping him round the face telling him to. Lennie feels guilty afterwards and he shows it when he says, "I didn't wanta hurt him," and "I didn't mean no harm." It is this scene that enables us to see the extent of Lennie's strength and how dangerous it can be when combined with such a simple mind. The scene gives us a clue towards the main plot. Without this scene we would not realise what a true accident Curley's wife's death was and the reader would not feel as sorry for Lennie as they do. It would make the ending much less effective. ...read more.