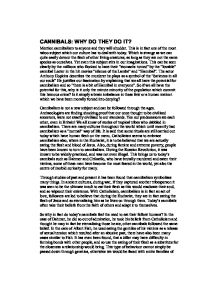 Cannibals - Why do they do it?

CANNIBALS: WHY DO THEY DO IT? Mention cannibalism to anyone and they will shudder. This is in fact one of the most taboo subject which our culture has to deal with today. Which is strange as we can quite easily devour the flesh of other living creatures, as long as they are not the same species as ourselves. Yet even this subject stirs in our imaginations. This can be seen clearly by the millions who flocked to have their "stomachs turned" by the "lovable" cannibal Lecter in the hit movies "silence of the Lambs" and "Hannibal". The actor Anthony Hopkins describes the murderer he plays as a symbol of the "darkness in all our souls" He justifies our fascination by explaining that we all have the potential for cannibalism and so "there is a bit of Hannibal in everyone". So if we all have the potential for this, why is it only the minute minority of the population which commit this heinous crime? ...read more.

This brings us to today's cannibals such as Dahmer and Chikatilo, who have brutally murdered and eaten their victims, some of these men have become the most feared in the world, yet also the centre of morbid curiosity for many. Through studies of past and present it has been found that cannibalism symbolises many things. In ancient cultures, during war, if they captured another tribesperson it was seen to be the ultimate insult to eat their flesh as this would eradicate their soul, and so wipeout their existence. With Catholicism, cannibalism is in fact an act of love, followers are led to believe that during the Eucharist, they are in fact eating the flesh of Jesus and so eternalising him as he lives on through them. Today's cannibals often take their beliefs from the faith of others and adapt it to themselves. So why in fact do today's cannibals feel the need to eat their fellow humans? ...read more.

Similarly the area of the brain called the "prefrontal cortex", when damaged can cause a malfunction in the human brain where their primitive brain takes over the area of the brain which causes reason and compassion. Also when there is an error in our bodies' functions, a low level of seratonin may be combined with high levels of testosterone and prove deadly as a desire for dominance appears, which has been linked with acts of cannibalism. This would also help to explain why the female cannibal is never heard of. Therefore, can we justify the acts of today's sick criminals by looking into out own ancestral history? Or do we need to venture into the malfunctions within the brains of these sick-minded creatures? I feel that it is simply not possible that every one of us has an urge within them to dine on human flesh. I believe that our species has evolved beyond that. Just as we began to walk upright. I conclude that the small minority who still feel this urge are simply an insane exception to the now evolved human race. ...read more.