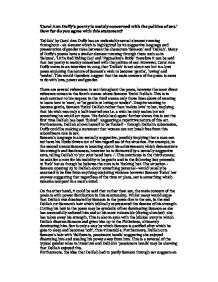 'Carol Ann Duffy's poetry is mainly concerned with the politics of sex.' How far do you agree with this statement? 'Delilah' by Carol Ann Duffy has an undeniably sexual element running throughout - an element which is highlighted by its suggestive language and presentation of gender roles between the characters 'Samson' and 'Delilah'. Many of Duffy's poems have a similar element running through them such as in 'Salome', 'Little Red Riding Cap' and 'Pygmalion's Bride' therefore it can be said that her poetry is mainly concerned with the politics of sex. However, Carol Ann Duffy states in an interview in 2005 that 'Delilah' is not about sex but is a love poem exploring the nature of Samson's wish to become 'gentle', 'loving' and 'tender'. This would therefore suggest that the main concern of the poem is more to do with love, power and gender. There are several references to sex throughout the poem, however the most direct reference comes in the fourth stanza where Samson 'fucks' Delilah. This is in stark contrast to his request in the third stanza only three lines above of wanting to learn how to 'care', or 'be gentle or loving or tender''. Despite wanting to become gentle, Samson 'fucks' Delilah rather than 'makes love' to her, implying that his wish was only a half-hearted one i.e. ...read more.

Furthermore, Delilah cuts Samson's hair with 'deliberate, passionate hands' suggesting she enjoyed disarming him and stealing his power away from him. This is a reversal of the typical gender roles in literature and Delilah's 'passionate hands' may be showing that Delilah enjoyed this. Furthermore, the idea that Delilah had to pacify Samson through sex suggests an element of power on Delilah's side as sex was a method through which she satisfied Samson and put him to sleep, leaving him vulnerable. Duffy may be making a statement through this that women can use their sexuality as a weapon to weaken men and thus overpower them. This interpretation is concerned with both sexual politics and power distribution demonstrating that Duffy's poetry is not only concerned with the politics of sex. In another interpretation of the poem, it could be said that the main concern of the poem is not the politics of sex, but it is actually about Delilah fulfilling Samson's request of making him 'gentle'. In an interview in 2005 with Barry Wood, Duffy talks about the poem and says 'In this poem I have her do it (cut his hair) so that instead of becoming powerless he becomes gentle'. Duffy keeps up a series of rhymes and half-rhymes on the word ' hair' through the poem such as 'care', 'roar', 'bear', 'scar' to keep the reader on the theme of Delilah cutting Samson's hair in order to make him less powerful and thus gentle. ...read more.

Also, as the insight Duffy has given in her interview does not match the biblical story, there is a possibility of a double-meaning. This possibility is brought out by the lack of emotive diction in the poem particularly from Delilah's behalf. She only describes him as 'handsome and huge' when he is asleep i.e. vulnerable to becoming overpowered which could mean that he only appeals to her when he is weak and she is able to take advantage of this. Other than the above example, the speaker does not use emotive language to describe Samson which suggests a lack of emotion or love towards Samson. This heightens the idea of a double-meaning in the poem which carries a concern with the politics of sex. Upon reading the poem for the first time, 'Delilah' comes across as a poem highly focused on sex and power as demonstrated by the suggestive language used throughout. However, by reading the interview with Barry Woods, we can see that sexual politics is not the entire focus of the poem and much of the poem is actually concerned with love and gender. In fact, it can even be argued that the poem has no concern with the politics of sex and is in actual fact a love poem as Duffy herself states in her 2005 interview. To conclude, 'Delilah' is a poem open to several different interpretation - it can be seen as a directly sexual poem or more deeply a love poem. ...read more.

This is a strong essay that considers several alternative interpretations and uses good evidence from the text, but could improve its technical vocabulary. The student responds well to the need to contrast different interpretations: by devoting a paragraph to how ...

This is a strong essay that considers several alternative interpretations and uses good evidence from the text, but could improve its technical vocabulary. The student responds well to the need to contrast different interpretations: by devoting a paragraph to how "Delilah" could be seen as being about sex, and then another to how it could be seen as being about the power distribution in the relationship, and so on, the student is showing that they are not focusing on one interpretation but are thinking widely about what other readers may think as well. Quoting the interview with Barry Woods is good because the student is providing evidence for a particular interpretation. However, the student focuses most of their essay on one poem, "Delilah", when the question refers more broadly to "Carol Ann Duffy's poetry". For a question like this, it would be better for the student to refer in detail to at least three of Carol Ann Duffy's poems in order to prove that they have enough knowledge to answer the question set. It is not enough to mention them in the introduction then not go on to address them in the essay.

The student demonstrates some understanding of basic technical vocabulary, such as using terms like "stanza", which is good as it shows the student has a good understanding of the techniques Duffy has used to craft her poem, rather than just a vague idea. However, the student could improve by using more frequent and more advanced vocabulary: they could build on their analysis of the rhymes by pointing out, for example, that the first stanza has a rhyme scheme of AABCDB. This would show they have engaged with the poem and used some technical knowledge to show it. The conclusion is excellent as it summarises the argument and picks up on some of the things previously argued (such as the Barry Woods interview). The student then uses this to reach an answer to the original question. It is fine to do what this student does and reach a judgement saying the poem is open to interpretation - after all, the conclusion is supposed to be a summary and judgement of what you have argued, so if you have argued more than one interpretation (which you should have) it is logical to conclude in this way.

The student is right to quote directly from the poem, as it shows that they can back up their analysis with evidence. It is especially good that they use quotes within their own sentences, such as "Delilah cuts Samson's hair with "deliberate, passionate hands" suggesting...", because this shows that the student can blend their own analysis with evidence from the text. The student does not refer to context: it would improve their analysis if, for example, they considered how some elements of Duffy's biography might encourage her to write about the politics of sex, because it would show a good understanding of influences on the text. However, context is not always required for all questions on an exam paper, so check with your teacher first.

The quality of this essay's writing is excellent. By starting a new paragraph for each new interpretation, the student is using the structure of their essay to show they understand the need to balance alternative opinions on the text. Furthermore, the decision of the student to avoid using the word "I" - such as "I think" or "I agree" - is good because it makes the essay sound more academic, and less personal and informal. The spelling, grammar and punctuation is very good but there are a few minor spelling errors, such as the lack of an "s" at the end of "open to several different interpretation", which gives a slight sense that the essay is rushed and not proofread. However, this is still a very good essay that would score high marks.