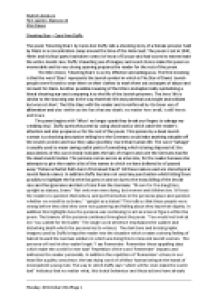 ﻿English Literature Fern Lawton, Neptune 12 Miss Davies Shooting Star ? Carol Ann Duffy The poem 'Shooting Stars' by Carol Ann Duffy tells a shocking story of a female prisoner held by Nazis in a concentration camp around the time of the Holocaust. The poem is set in 1940, Hitler and his Nazi party had taken control of most of Europe and had vowed to exterminate the entire Jewish race. Duffy's haunting use of imagery and word choice make this poem so memorable and its very strong opening prepares the reader for the rest of the poem. The title choice, 'Shooting Stars' is a very effective and ambiguous. The first meaning is that the word ?Stars? represents the Jewish symbol in which is The Star of David. Jewish people were forced to wear them on their clothes to mark them out as targets of abuse and torment for Nazis. Another possible meaning of the title is metaphorically symbolising a literal shooting star and comparing it to the life of the Jewish prisoners. The Jews' life is similar to the shooting star in the way that their life and potential was bright and brilliant but was cut short. The title stays with the reader and is reinforced by its clever use of alliteration and also reinforces the fact that any death, no matter how small, is still heroic and brave. ...read more.

Remember these appalling days which make the world for ever bad? Repetition of the word ?Remember? impacts and addresses the reader personally. In addition the repetition of 'Remember' echoes in our head like a guilty conscience, the last dying word of a fellow human being at the hands of incompetent young men. The way in which Duffy says ?which will for ever make the world bad? Indicates that no matter what, this brutal behaviour and these actions have already occurred. Furthermore nothing anyone does will erase what has happened to the innocent Jews, which impacts on how the world will almost be forever tainted as sometimes being a bad place. After the brutality that has already occurred Duffy continues to bring in more imagery whilst describing the persona getting raped. Although Duffy narrows into the rape at first with a subtle manor by saying ?One saw I was alive. Loosened his belt.? The enjambment between ?loosened? and ?belt? draws the attention to the horrific fact that this woman is actually about to be raped. Duffy goes about it in a very subtle way, but the graphic description we get next is enough to make anyone feel the sheer impact of what has just occurred. The horror of what is happening to the poor innocent Jew continues as Duffy says ?My bowels opened in a ragged gape of fear? I believe this is one of the lines in the poem which has most impact toward the reader. ...read more.

Her story is terrible and sad, but she will never let us forget. Her final lines echo the words of the 25th psalm ?Turn thee unto me with mercy, for I am desolate and lost.? The persona is finally telling the reader of how she is ?desolate and lost?, a sad and reflective ending which makes the persona seem nostalgic but also everlasting, her voice echoes in our heads. The persona left it until the end as the dignity and true belief in her religion kept her strong in one of the worst situations in which any human being could be placed in. Shooting Stars? is a story of heroic life being destroyed and taken away by guiltless soldiers who believe what they are doing is for the good of their country. The poem is told differently as it does not tell the fanciful tales of the glory of the war, it tells it how it is. It tells of the real heroic people of the world, the innocent blood of women and children, pooling on the ground in countries like Iraq and Bosnia, and Duffy lets the reader know that these events are still going on and ?The world turns in its sleep? as if we do not care and forget the terrible events which happened. But Duffy says we must 'Remember' and her haunting words from the grave will never be forgotten. We will not forget. ________________ Monday, 08 October 2012Page ...read more.