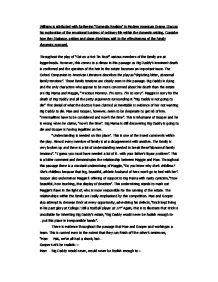 Williams is attributed with furthering "Domestic Realism" in Modern American Drama. Discuss his exploration of the emotional burdens of ordinary life within the domestic setting. Consider how the: Dialogue, setting and stage directions add to the effectiveness of the family dynamics exposed. Throughout the play of "Cat on a Hot Tin Roof" various members of the family are at loggerheads. However, this comes to a climax in this passage as Big Daddy's imminent death is confirmed and the question of the heir to the estate becomes an important issue. The Oxford Companion to American Literature describes the play as "depicting bitter, abnormal family tensions". These family tensions are clearly seen in this passage. Big Daddy is dying and the only characters who appear to be more concerned about his death than the estate are Big Mama and Maggie, "Precious Mommy. I'm sorry. I'm so sorry". Maggie is sorry for the death of Big Daddy and all the petty arguments surrounding it. ...read more.

Still a football player at 27!" Again, this is to illustrate that Brick is unsuitable for inheriting Big Daddy's estate, "Big Daddy would never be foolish enough to-...put this place in irresponsible hands". There is evidence throughout the passage that Mae and Gooper and working as a team. This is carried even to the extent that they can finish off the other's sentences, "Mae: Yais, we've all had a shock, but... Gooper: Let's be realistic - Mae: Big Daddy would never, would never be foolish enough to - Gooper: - put this place in irresponsible hands" Their team work is also illustrated through the parallel thoughts, "there is a quick violent look between Mae and Gooper". This aggression and violence becomes more physical when, "Gooper has stalked up to Margaret with clenched fists...as if he would strike her. Mae distorts her face...into a hideous grimace". There are many examples of other physical assertions that emphasise the emotions and family dynamics. ...read more.

Remember him?-who could forget him?" This source of this rivalry is explained at a deeper level when the stage directions state, "tense with sibling envy". I believe there has always been a tension between Brick and Gooper due to this rivalry and that it is merely emphasised in this conflict. Before Tennessee Williams and some of his contemporise, such as Arthur Miller, theatrical dramas were often about a glamorised or sanitised version of domestic events rather than a realistic portrayal. However, Williams does not glamorise life and the events within "Cat on a Hot Tin Roof" may be a realistic definement of family life in the 1950's. The Second World War had cost America many young lives. Therefore, the social conventions and family hierarchies may have been adjusting to life after the war. The emotions within the play are not sanitised but Tennessee Williams demonstrates the devastating effects of the family tensions. Williams rightly deserves the criticism of "Furthering domestic realism in American Drama". ...read more.