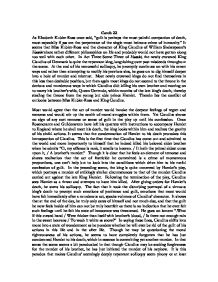 Catch 22 As Elisabeth Kubler-Ross once said, "guilt is perhaps the most painful companion of death, most especially if you are the perpetrator of the single most heinous crime of humanity." It seems that Miss Kubler-Ross and the character of King Claudius of William Shakespeare's Hamlet share rather different philosophies on life and probably would not have gotten along too well with each other. In Act Three Scene Three of Hamlet, the newly crowned King Claudius of Denmark is quite the repentant king, languishing over past misdeeds throughout the scene. At the end of his remorseful soliloquy, he promptly continues on with his errant ways and rather than attempting to rectify his previous sins, he goes on to dig himself deeper into a hole of murder and mistrust. Most newly crowned kings do not find themselves in this less than desirable position, but then again most kings do not ascend to the throne in the devious and murderous ways in which Claudius did: killing his own brother and moving on to marry his brother's wife, Queen Gertrude, within months of the late king's death, thereby stealing the throne from the young but able prince Hamlet. Therein lies the conflict of outlooks between Miss Kubler-Ross and King Claudius. Most would agree that the act of murder would invoke the deepest feelings of regret and remorse and would stir up the zenith of moral struggles within them. ...read more.

This brings about yet another paradox. As mentioned earlier, Claudius' greed and hunger for power is what has brought him to the state he is at and is dominant over any other feelings hey may have. However, later in the soliloquy, after some wonderment as to whether his moral slate will ever be wiped clean of his sinful actions he comes to the conclusion that if all stays the way it is, no prayer will ever clear him of his misdeeds. "'Forgive me my foul murder'? / That cannot be, since I am still possessed / Of those effects for which I did the murder, / My crown, mine own ambition and my queen." In this statement, he admits that until he renounces his ill gotten throne, leaves his illegitimate marriage and rids himself of his sinful ambitions, he will not be able to seek salvation of any sort from the sins he has committed. Yet he lacks the will power to actually carry out what he truly feels and realizes is right and lets the dominance of his insatiable appetite for power and materialistic satisfaction reek over him. Claudius has now shown in two cases in the scene that his character is in fact not completely void of morals, as he does come to realize and differentiate between right and wrong. Rather, his character is weak in morality, as he lacks the ambition to do what is right and lets the demon in him preside over the angel, and that is what makes him the antagonist of the play. ...read more.

In this soliloquy, Claudius reveals himself as a confused man, who realizes the wrong in his past and current misdeeds and knows how to rectify them, a benefit many don't get, but despite this, continues to venture on his destructive path to power only leading him to his own grave. The two paradoxes portrayed in this soliloquy are essentially what constitute his character: he realizes the murder of his brother was wrong but attempts to kill his brother's son; and he sees that the only way to gain the repentance he so eagerly seeks is to give up all that he has gained from the murderous act yet he does nothing but embrace them. He does not have inertia in his unwillingness to right his wrongs but rather lacks the will power and morality to do so. He seems to have no problem in carrying out tasks that benefit his path to power but seems to falter whenever they deal with giving up one of the many material satisfactions he has gained from the murderous act he has committed. It seems that he acts upon his emotions of greed but not on his emotions of guilt, which is signature of a morally frail character. In summation, returning to Miss Kubler-Ross' words that "guilt is perhaps the most painful companion of death most especially if you are the perpetrator of the...crime...", it has become clear that if guilt, or in this case the sheer lack of it, are not companions of death, the perpetrator in question will be in the company of death. ...read more.