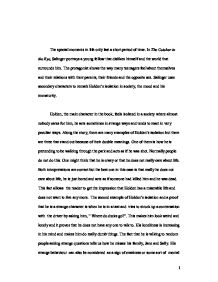 Catcher in the Rye

The special moments in life only last a short period of time. In The Catcher in the Rye, Salinger portrays a young fellow that dislikes himself and the world that surrounds him. The protagonist shows the way many teenagers feel about themselves and their relations with their parents, their friends and the opposite s*x. Salinger uses secondary characters to remark Holden's isolation in society, the mood and his immaturity. Holden, the main character in the book, feels isolated in a society where almost nobody cares for him, he acts sometimes in strange ways and tends to react in very peculiar ways. Along the story, there are many examples of Holden's isolation but there are three that stand out because of their double meanings. One of them is how he is pretending to be walking through the park and acts as if he was shot. Normally people do not do this. One might think that he is crazy or that he does not really care about life. Both interpretations are correct but the best one in this case is that really he does not care about life, he is just bored and acts as if someone had killed him and he was dead. ...read more.

Holden feels that he is a failure because his brother has done well in life and he has done nothing except go to a good schools and get himself kicked out because he failed too many subjects. His family wouldn't feel proud of him being kicked out of school and living by himself somewhere. An example, is when he wants to talk to Phoebe and says, " I mean I couldn't sit there on that desk for the rest of my life, and besides, I was afraid my parents might barge in on me all of the sudden .....". (161) He was afraid his parents would catch him out of school and he would have to tell the whole story. Sometimes the reader feels pity for him for example when he gets drunk and walks until his hair freezes. The feeling is that he is extremely lonely. Another moment in where there is a feeling of pity for him is when he calls a prostitute and instead of having s*x with her, he talks to her. When he does not want to pay the whole fee, a big guy comes and threatens him to kill him. ...read more.

He behaves like a small kid fighting over a girl that he knows very little. The need for psychiatric help is another proof of his lack of maturity and how difficult life seems to him. For this reason Holden tells the Doctor what he thinks and feels to get the help he needs. He is not responsible because he does not want to assume his obligations and study. He does not mind being expel from four schools and does not react as a seventeen year old. Holden has no respect for himself or for most of the things that surround him. He does not feel happy with himself. He does not like himself and feels that most people do not like him or understand him either. Through his relations with the people around him, Salinger shows us Holden's personality. His isolation and loneliness. The sympathy that the reader feels for him sometimes and his immature character. His problematic personality shapes the story as a strong one, that has to be read slowly because of its many symbolisms, where many people can recognize themselves in the way Holden reacts and feels in everyday life experiences. It is a great book because Holden is very ironic and combines well serious matters with some very funny scenes, with which all of us can feel identified. ?? ?? ?? ?? 1 ...read more.