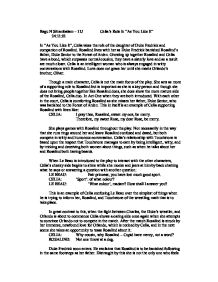 Ragu N Sittambalam - 11J Celia's Role In "As You Like It" 24:11:01 In "As You Like It", Celia takes the role of the daughter of Duke Fredrick and companion of Rosalind. Rosalind lives with her as Duke Fredrick banished Rosalind's father, Duke Senior to the Forest of Arden. Growing up together Rosalind and Celia have a bond, which surpasses normal cousins, they have a sisterly love and as a result are much closer. Celia is an intelligent woman who is always engaged in witty conversations with Rosalind. Love does not grace her until she meets Orlando's brother, Oliver. Though a main character, Celia is not the main focus of the play. She acts as more of a supporting role to Rosalind but is important as she is a key person and though she does not bring people together like Rosalind does, she does show the more mature side of the Rosalind, Celia duo. In Act One when they are both introduced. With each other in the court, Celia is comforting Rosalind as she misses her father, Duke Senior, who was banished to the Forest of Arden. ...read more.

In great contrast to this, when the fight between Charles, the Duke's wrestler, and Orlando is about to commence Celia shows a caring side once again when she attempts to convince Orlando not to compete in the match. After the match Rosalind is struck by her immense, newfound love for Orlando, which is noticed by Celia, and in the next scene she takes an opportunity to tease Rosalind about it: CELIA: Why cousin, why Rosalind - Cupid have mercy, not a word? ROSALIND: Not one throw at a dog. Duke Fredrick soon enters. He exclaims that Rosalind is to be banished following in the same footsteps as her father. Distraught by this she is not the only one who feels the pain and in a sense of great optimism she decides to go with Rosalind. At the time they do not know where until Celia says that they are going to go and: CELIA: To seek my uncle in the forest of Arden. Even though this should be a moment of sadness, having to leave your own home Celia manages to turn the whole situation round to change the mood, as if the whole journey ...read more.

This may be because Celia finds that what Rosalind is doing to Orlando is beginning to be cruel or perhaps maybe Celia is beginning to grow jealous of Rosalind. The slight anger that is portrayed by Celia is shown here: ROSALIND: Never talk to me; I will weep. CELIA: Do, I prithee; but yet have the grace to consider that tears do not become a man. This possible jealousy or possibly anger is soon stopped when Oliver, Orlando's older brother is reintroduced. Changed by the forest, and the way that he is saved by his brother, Oliver is favoured much by Celia who falls in love with him much in the same way as Rosalind had done with Orlando which gives Rosalind the chance to "get her own back" on Celia. Though present in many of the scenes, Celia does not always say a lot but is a character who witnesses most of the events and potentially has the most knowledge of what exactly happens in the play. She also provides a lot of wit and humour to the play. ...read more.