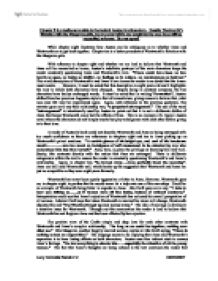 Chapter 8 of Jane Austen's &quot;Persuasion&quot; is a testing preamble to the typical Austen love/loss story. Despite Wentworth's flirtation with the Musgrove girls, we are never left in any doubt that he and Anne will be reconciled as lovers. Do you agree?

Chapter 8 is a testing preamble to the typical Austen love/loss story. Despite Wentworth's flirtation with the Musgrove girls, we are never left in any doubt that he and Anne will be reconciled as lovers. Do you agree? While chapter eight illustrates how Austen can be ambiguous as to whether Anne and Wentworth are to get back together. Chapter ten is a better precedent of Wentworth's flirtation with the Musgrove girls. With reference to chapter eight and whether we are lead to believe that Wentworth and Anne will be reconciled as lovers, Austen's indefinite portrayal of the main characters keeps the reader constantly questioning Anne and Wentworth's love. "There could have been no two hearts so open, no tastes so similar, no feelings so in unison, no countenances so beloved." This vivid description of Wentworth's and Anne's love leaves the reader in no doubt that the lovers must reunite. . However, it must be noted that this description is eight years old and it highlights the way in which both characters have changed. Despite being in constant company, the two characters have barley exchanged words. ...read more.

Could be an example of Wentworth being bitter in regards to Anne. Mrs Croft goes on to say, "I hate to hear you talking so.......as if women were all fine ladies, instead of rational creatures." Interpretation could say that Anne's rejection of Wentworth has coloured his overall perspective of all women. Admiral Croft says that when Wentworth is married his views will change, Wentworth disputes this and "He [Wentworth] got up and moved away." The idea of marriage is obviously a sensitive issue for Wentworth. Through out this convocation the reader is lead to believe that Wentworth has not forgiven Anne and has been affected by her rejection. The positive view of the Crofts simple and deep love for each other contrasts with Wentworth and Anne's complex relationship. "As long as we could be together, nothing ever ailed me." Mrs Musgrove, another happily married woman, replies to Mrs Croft saying, "There is nothing so bad as a separation." The language seems to be implying that Anne and Wentworth's separation is to have lasting effects on both characters. ...read more.

"There was no triumph, no pitiful triumph in his manner." This chapter is much more sympathetic towards Anne. As the book progresses so do Wentworth's feelings. There is no intentional malice in Wentworth's relationship with the Musgroves. When, "Captain Wentworth, without saying a word, turned to her [Anne] and quietly obliged her to be assisted into the carriage" it could be read that Wentworth still has feelings for Anne. On the other hand, Wentworth helping Anne into the carriage shows him as a respectable man who shows politeness, as was custom at the time. This leads me to my final point. Wentworth's moral uprightness, exemplified by his being in the navy and being admired by the Crofts and the Musgroves, characters who are to be admired in their own right, makes him a perfect match for Anne, a character, who few people, other than her own family, dislike. Austen is purposefully enigmatic in her portrayal of Wentworth and Anne's relationship. However, whenever there is a reference to Anne and Wentworth not getting back together, there is sure to be another hinting the pending reuniting of the lovers. Lucy Concetta Rands LVI 06/03/2004 ...read more.