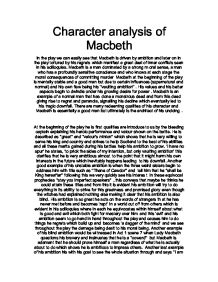 Character analysis of Macbeth In the play we can easily see that Macbeth is driven by ambition and later on in the play tortured by his regrets which manifest a great deal of inner conflicts seen in his soliloquies. Macbeth is a man dominated by a strong moral sense, a man who has a profoundly sensitive conscience and who knows at each stage the moral consequences of committing murder Macbeth at the beginning of the play is mentally stable and a good man but due to certain influences (supernatural and normal) and his own flaw being his ''vaulting ambition''. His values and his better aspects begin to dwindle under his growing desire for power. Macbeth is an example of a normal man that has done a monstrous deed and from this deed giving rise to regret and paranoia, signalling his decline which eventually led to his tragic downfall. There are many redeeming qualities of his character and Macbeth is essentially a good man but ultimately is the architect of his undoing. At the beginning of the play he is first qualities are introduce to us by the bleeding captain explaining his heroic performance and valour shown on the battle. He is described as ''great'' and ''valour's minion'' which shows that he is very willing to serve his king and country and strives to help Scotland to the best of his abilities and all these merits gained during his battles help his ambition to grow. ...read more.

The first signs of this paranoia is evident in act when he states ''to be thus is nothing but to be safely thus''. This shows that he feels unsafe and that unless you are safe you are nothing and now he is influenced to destroy anything which might jeopardize his safety and the first obstacle being Banquo. Reasons such as ''his royalty of nature reigns that which would be feared'' and Macbeth states his mind is full of scorpions and his life is filled with 'terrible dreams/That shake us nightly', following these thoughts he quickly and subtly organises the killing of Banquo by means of hiring assassins. This action is a major step in Macbeth's moral fibre due to the reason that Banquo was originally his most trusted friend and ally and the evidence he is beginning to use murder as a tool to solve most of his issues and concludes with himself that it is the only solution to his problems. There are also signs of the influence of jealousy with regards to when Banquo was told during the first encounter with the witches that he would ''have kings but be none'' and Macbeth realises that upon his head he now has ''a fruitless crown'' and ''a barren sceptre'' in his grip which angers him by the knowledge that his sons (if he ever has any) will never be air to the throne, this being another reason to murder Banquo. ...read more.

Back to the issue addressing his conscience with regards to it being a redeeming quality that is fighting a losing battle against the rest of the conflict within him. We witness many times his conscience trying to override his normal behaviour. Macbeth's conscience creates the ghost of Banquo in an attempt to make him subconsciously confess to the murders which make us realise he is very sorry for what he has done which redeems him slightly through sympathy. One last sign of redeeming qualities is neat the end of the play where he stares in the face of death. He contemplates suicide by falling on his own sword as ''Romans'' used to do but even though he knows he has no one on his side he will fight to the end and die an honourable death showing his original bravery which he once used to fight for his country which reminds us that he was once a great hero. To conclude Macbeth is a tragic hero. A man with an ambitious but a victim of temptation and the pseudo prophecies of his rise to power which seemed so close at the time was actual the beginning of Macbeth's change from hero to tyrant. He was used as a vessel for chaos by the witches to plant their ideas of power into a fertile mind which was nurtured by his blind ambition which grew into an unstable mind tormented by regret and guilt. ?? ?? ?? ?? ...read more.