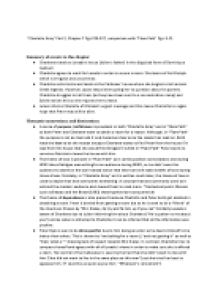 ﻿?Charlotte Gray? Part 2, Chapter 7 Pgs.225-227, comparison with ?Flare Path? Pgs. 8-11 Summary of events in the chapter * Charlotte travels to Levade?s house (Julien?s father) in the disguised form of Dominique Guilbert. * Charlotte agrees to work for Levade in order to secure a room. She learns of his lifestyle which is irregular and uncommon. * Charlotte visits Andre and Jacob at the Cariteaus? house where she begins to tell ancient Greek legends. However, Jacob keeps interrupting her to question about his parents. Charlotte struggles to tell them (as they have been sent to a concentration camp) and Sylvie notices this so she requests her to leave. * Julien informs Charlotte of Mirabel?s urgent message and this causes Charlotte to regain hope that Peter may still be alive. Thematic connections and distinctions * A sense of purpose /selfishness is prevalent in both ?Charlotte Gray? and in ?Flare Path? as both Peter and Charlotte want to obtain a room for a reason. Although, in ?Flare Path? the purpose is not as clear and it only becomes clear once the reader has read on. ...read more.

Her control of her behaviour is seen by the fact that she didn?t want to live with him (?she did not want to live in the same place as this man?) yet she tried her best to appease him. (?I could be as quiet as you like?, ?Whatever?s convenient?) Public taste and context * Both Peter and Charlotte carry a very selfish purpose as Peter is willing to break up a marriage just to get Patricia to come with him. Charlotte is also very selfish as she is willing to jeopardise a mission and abandon others to find Peter in France. Her selfishness is seen as she constantly lies to Levade about reasons of staying at his house. The fact that she can be so selfish reflects on the audience as its much later hence the feelings towards war have died down. However, in ?Flare Path? Peter leaves without telling Teddy to show a loss in selfishness and this could perhaps be due to the fact that in the WW2 the context the audience had to care about others and pull together. * The theme of dependence is present perhaps just to further the adventure of the characters as it would be absurd if Charlotte secured a room by just turning up. ...read more.

Moreover, he accepts her cooking as seen by ?when you?ve made dinner?. Also, as Julien enters the house the atmosphere relaxes because he cares about Charlotte. Context * Peter Kyle stands for ignorance, selfishness and disrespect i.e the exact opposite of the ideal war hero in WW2 context. The audience see him to be unpatriotic and only be concerned about his own purpose. Also, the fact that he is being disrespectful to Mrs Oakes (someone who stands for a true patriotic woman in the WW2 context) emphasises to the audience about the personality of someone who is disliked during WW2. * Charlotte stands for a strong female character that every woman should aspire to be as she believes in her morals and rights. In context of the 1990?s there was a huge gender equality shift as women were gaining more power in society and hence Charlotte stood for everything that women should be. * Doris and Julien have a minor role in the scene and they stand for characters who aid the main/ important protagonists. Perhaps portraying the idea of helping others. Moreover, both of them also stand for love as Julien is attracted to Charlotte whilst Doris is ?attracted? to Peter Kyle showing that love is possible in the WW2 context. ...read more.