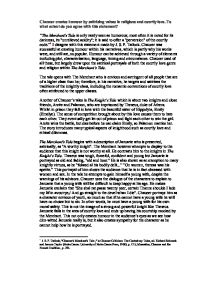 Chaucer creates humour by satirising values in religious and courtly love. To what extent do you agree with this statement?

Chaucer creates humour by satirising values in religious and courtly love. To what extent do you agree with this statement? "The Merchant's Tale is only rarely seen as humorous; most often it is noted for its darkness, its "unrelieved acidity"; it is said to offer a "perversion" of the courtly code."1 I disagree with this statement made by J. S. P. Tatlock. Chaucer was successful at creating humour within his narratives, which is partly why his works were, and still are, so popular. Humour can be achieved through a variety of elements including plot, characterisation, language, timing and circumstance. Chaucer used of all these, but largely drew upon the satirical portrayals of both the courtly love genre and religion within The Merchant's Tale. The tale opens with The Merchant who is envious and astringent of all people that are of a higher class than he; therefore, in his narrative, he targets and satirizes the traditions of the knightly class, including the romantic conventions of courtly love often attributed to the upper classes. Another of Chaucer's tales is The Knight's Tale which is about two knights and close friends, Arcite and Palamon, who are imprisoned by Theseus, duke of Athens. Whilst in prison they fall in love with the beautiful sister of Hippolyta, Emily (Emelye). The sense of competition brought about by this love causes them to hate each other. ...read more.

Courtly love was a contradictory experience between erotic desire and spiritual achievement, "a love at once illicit and morally elevating, passionate and self-disciplined, humiliating and exalting, human and transcendent".2 At first, Damian seems to possess these qualities and at the wedding of Januarie and May, his desire for adultery is made clear, "So sorre hath Venus hurt him with hire brond". The principles of courtly love are satirised through the characterisation of the characters. Januarie is lecherous, May is greedy and Damian is lustful. These virtues add humour to the narrative, as none of them are worthy heroes. At the end of his wedding, Januarie rushes his guests to leave "as best mighte, savinge his honour" so that he can be with his new wife May. The idea of an "oold and hoor" knight rushing around excitedly and at the same time trying to be polite makes the audience laugh. The genre of courtly love is further satirised through the imagery of May and Damian having s*x in a pear tree, "in he throng", whilst the blind Januarie clings to the trunk underneath. A sense of dramatic irony is achieved here at Januarie's expense, as he, at first, has no knowledge of what is happening whereas the audience, although shocked by the nature of this act, are not particularly surprised by its occurrence. In a story about courtly love, there is usually a reason why the adulterous lover and their partner are not suited for one another. ...read more.

Even the goddess Venus sees the amusement in such a match: 'For Januarie was bicome hir knight', who is far from being young, courageous and noble. In conclusion, The Merchants Tale does satirise both the genre of courtly love and religion to an extent within the narrative, and this frequently creates humour. The conventions of courtly love are satirised through characterisation and exaggerated to such an extent by imagery and tone that the silliness of the events are emphasised and mocked. In particular the 'religion of love' falls prey to the narrator's sarcasm, which serves to enhance our comical appreciation of the witty narrative and its ridiculous characters. Religion is not satirised as much, however the use of misquoting biblical authorities and figures, alongside the blessing of such an ill-fitting couple, does seem to ridicule the church. Although other elements of the narrative, such as the choice of language combined with rhythm and pace, also contribute towards creating humour, it is the over-all conclusion of all these factors which makes The Merchant's Tale a truly successful comedy. 1 J. S. P. Tatlock, "Chaucer's Merchant's Tale ," in Chaucer Criticism: The Canterbury Tales, ad. Richard Schoeck and Jerome Taylor (Notre Dame: University of Notre Dame Press, 1960). p. 175; Muscatine, Chaucer and the French Tradition , p. 231. 2 Francis X. Newman, ed. (1968). The Meaning of Courtly Love, vii. 3 Chaucer's ironic challenges to authority in The Merchant's Tale, John Thorne ?? ?? ?? ?? ...read more.