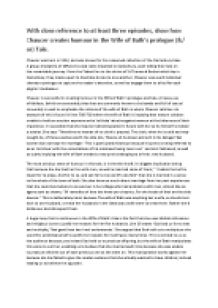 Chaucer is successful in creating humour in the Wife of Baths prologue and tale.

ï»¿With close reference to at least three episodes, show how Chaucer creates humour in the Wife of Bath’s prologue (&/ or) Tale. Chaucer was born in 1343, and was known for his renowned collection of the Canterbury tales. A group of pilgrims of different social ranks travelled to Canterbury, each telling their tale on the remarkable journey. From the Tabard Inn to the shrine of St Thomas á Becket which lay in Canterbury, they made a pact to illustrate stories to one another. Chaucer uses each individual character prologue to capture the reader’s attention, as well as engage them to a feel for each pilgrim’s behaviour. Chaucer is successful in creating humour in the Wife of Bath’s prologue and tale. A heavy use of fabliaux, (which are extended jokes that are commonly known to be bawdy and full of s****l innuendo) is used to emphasize the ridicule of the wife of Bath in whom Chaucer satirizes. ...read more.

was anything but a wife, as she did not stick to one husband, or treat her husbands in the ideal way a wife were to treat them. Rather she?d dishonour and disrespect them. A huge irony that is continuous in the Wife of Bath?s tale is the fact that she uses biblical references and religious icons to justify her reasons for her five husbands. Line 28 states ?God bad us for to wex and multiplie; That gentil text kan I wel understonde.? She argued that God told us to multiply so she used this as biblical proof to justify her reasons for marring so many times. This is comical to us as the audience because, yes indeed God told us to produce offspring, but the wife of Bath manipulates this verse to suit her, enabling us to believe that she married each time because she was unable to produce children out of each previous one as she went on. ...read more.

face after she had provoked him by ripping three pages out of the book that was downcasting wives; ?I with my fest so took him on the cheek, That in oure fyr he fil backward adoun.? She lunged at him out of nowhere, and it?s unanticipated, as well as the fact it directly contradicts with Jankin?s opinion of a good and faithful wife. Out of the blue she unleashed her feisty behaviour upon him, and the shock diminished quicly enough as he ?up stirte as dooth a wood leoun.? It was particularly entertaining that the wife of Bath managed to single-handedly trick the scholar Jankin into obtaining the mastery of their relationship. A powerful imagery of the wife of Bath is her controlling the ?horse bridle? of their marriage, which illustrates the surrender of Jankin between lines 815-825. By exaggerating her ?near-death? experience, she was able to cunningly out-smart her husband to return all the land and property that she originally owned but decided to write-off to him previously out of foolish love. ...read more.