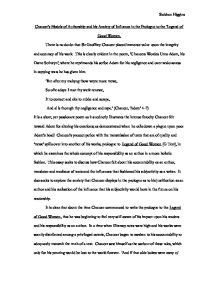 Chaucer's Models of Authorship and his Anxiety of Influence in the Prologue to the 'Legend of Good Women.

Chaucer's Models of Authorship and his Anxiety of Influence in the Prologue to the 'Legend of Good Women. There is no doubt that Sir Geoffrey Chaucer placed immense value upon the integrity and accuracy of his work. This is clearly evident in the poem, 'Chaucers Wordes Unto Adam, his Owne Scriveyn', where he reprimands his scribe Adam for his negligence and over zealousness in copying texts he has given him. 'But after my makyng thow wryte more trewe, So ofte adaye I mot thy werk renewe, It to correct and eke to rubbe and scrape, And al is thorugh thy negligence and r**e.' (Chaucer, 'Adam' 4-7) It is a short, yet passionate poem as it succinctly illustrates the intense ferocity Chaucer felt toward Adam for altering his creations; as demonstrated when he calls down a plague upon poor Adam's head! Chaucer's preoccupation with the transmission of texts that are of quality and 'trewe' spills over into another of his works, prologue to Legend of Good Women [G Text], in which he examines the whole concept of his responsibility as an author in a more holistic fashion. This essay seeks to discuss how Chaucer felt about his accountability as an author, translator and mediator of texts and the influences that fashioned his subjectivity as a writer. It also seeks to explore the anxiety that Chaucer displays in the prologue as to his justification as an author and his realisation of the influence that his subjectivity would have in the future on his readership. ...read more.

The comparison of poetry to flowers in the opening of the prologue to Legend is reminiscent of many works in Greek classical writings; even the word 'anthology' comes from Greek meaning, 'a gathering of flowers', which is essentially what Chaucer strives to do in the Legend of Good Women. Chaucer makes constant references to these 'olde bookes' in the prologue as if to show that his transparent parroting of these old works gives him authority as an author. In The Parliament of Fowles, Chaucer again gives a testimonial to these 'olde bookes', in a manner exceedingly similar to that in the prologue: 'For out of olde feldes, as men seyth, Cometh al this newe corn fro yer to yere; And out of olde bokes, in good feyth, Cometh al this newe science that men lere.' (Chaucer, PF 22-25) The Parliament of Fowles possess a parallel dream vision sequence to the prologue to the Legend of Good Women, in which the speaker experiences a fantastical dream and when awakes proceeds to document the story, and also again uses this metaphor of the book as something out of which nourishment grows. This resonates strongly with the image of Chaucer's stories as ears of corn in the prologue, what appears transparently is that Chaucer sees his work as the product of his new ideas of these 'bokes olde'; this process will now continue as new readers and authors will grow their new ideas from the 'olde feldes' that he has helped plough and sustain. ...read more.

(LGW 403-404). He intrusively comments on his functions and ultimately his main objective is in praise of the English vernacular itself; to reveal it and proliferate its literary use. By the end of the prologue, Chaucer seems to have reached a resolution on his anxieties over his influences and responsibilities as an author. Disparaged by the God of Love, and defended by Alceste, in an act of unintentional parroting the speaker in the poem awakes to immediately pen the dream vision that he has just had, thereby continuing the tradition of imitation and unwitting plagiarism. And with that word, of slep I gan awake, And right thus on my Legende gan I make. (LGW 544-545) There is a tone of urgency in the final lines - he is obligated to commit these tales to pen and immediately sets about to execute this work. It is as if he feels that this task has been specifically set out for him to complete and he must do this 'labour' as he refers to it. Chaucer is comfortable as an author who mediates between texts, and 'is at once a reader, a translator, a critic and a producer of texts.' (Desmond 62). Using the physical image of the book, Chaucer is authorised as a writer; for he has read and digested them and is now ready to sow the grain of their contents for his readership to ingest. Chaucer's fear and anxiety of misrepresenting this information that he has gained is nullified by the end of the prologue as he realises that he is preserving old thinking and in doing so sustaining literature. ...read more.