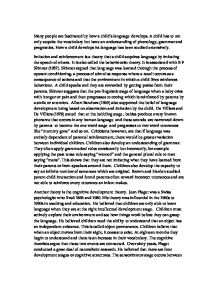 Many people are fascinated by how a child's language develops. A child has to not only acquire the vocabulary but have an understanding of phonology, grammar and pragmatics. How a child develops its language has been studied extensively. Imitation and reinforcement is a theory that a child acquires language by imitating the speech of others. It is also called the behaviourist theory. It is associated with B F Skinner (1957). Skinner argued that language was learned through the process of operant conditioning, a process of stimulus response where a result occurs as a consequence of actions and that the environment in which a child lives reinforces behaviour. A child speaks and they are rewarded by getting praise from their parents. Skinner suggests that the pre-linguistic stage of language when a baby cries with hunger or pain and then progresses to cooing which is reinforced by parents by a smile or attention. Albert Bandura (1963) also supported the belief of language development being based on observation and imitation by the child. De Villiers and De Villiers (1978) stated that at the babbling stage , babies produce every known phoneme that occurs in any human language and these sounds are narrowed down by parents to become the one word stage and progresses to two word utterances like "mummy gone" and so on. Criticisms however, are that if language was entirely dependant of parental reinforcement, there would be greater variation between individual children. Children also develop an understanding of grammar. ...read more.

.Children of a young age were baffled by this but children of 4 and 5 started to grasp this and stated "there are 2 wugs". This was the first proof that children extract generalized rules. Chomsky, a linguist from Philadelphia, argued that children have an innate ability to extract the rules of language they hear. He is perhaps the best known and influential linguist of the late 20th century. He suggests we are born with a set of rules about language already ingrained. He referred this to as "Universal Grammar" He claims this is the basis upon which all human languages are built. He called this innate structure, the Language Acquisition Device (LAD). Chomsky argues that all languages share the same deep structure; Subject, verb and object are common to all languages. Children have an innate awareness of the linguistic universals and this explains why children develop language so rapidly. Chomsky argues this is true as all children from different cultures pass through similar stages of development. Chomsky challenged Skinner's approach arguing that Skinner implies children learn entirely through trial and error and try out possible utterances and reject if not approved. Chomsky believed this is not possible to learn complex grammatical rules and an extensive vocabulary in the short space of time in which children develop language. Lunneburg (1967) also suggested in addition to Chomsky's theory, that there is a critical period hypothesis. He suggested the brain is designed to acquire language at a certain time (the first five years) ...read more.

Pavlov and Skinner were promoting ideas of classical conditioning and operant conditioning. Behaviorists believed that diary studies were incomparable as they wanted to generalize and discover the norm. Large sample studies were carried out for example Smith (1926) studied 124 between 2 and 5 years in one hour conversations. He noted the length of sentences and the general aspects of sentence development. Researcher s only looked for the desired features did not take into the rules that surround language acquisition. The accuracy of these reports was raised as they are in written form and there is no visual or audio evidence to back them up. There was also the effect of observers' paradox and the fact that an unusual environment and the presence of a stranger may have affected the children's speech. In the 1950's we saw the emergence of longitudinal sampling by linguists such as Braine (1963). A longitudinal study follows the same person over a long period of time. The advantage of such studies is it draws the positive features from the methodologies of diary studies and large sample studies. The research into child language is extremely difficult. Identifying and understanding when and why a child moves into another development is extremely tricky. Often a child may understand more than they can communicate to a parent or ever researchers. Any study, theory or piece of research has some validity. It is felt that all of the theories are possibly true, it seems apparent that a child may have innate ability to absorb language but also interaction with fellow humans is required. ...read more.