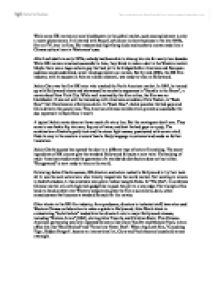 While some HK movies are now blockbusters in the global market, such accomplishment is only a recent phenomenon. It all started with Bruce Lee's career in show business in the late 1960s, first on TV, later in films. His trademarked high-flying kicks and acrobatic moves made him a Chinese cultural icon in Westerners' eyes. After Lee's death in early 1970s, nobody had been able to take up his role for nearly two decades. While HK movies remained successful in Asia, they failed to make a dent in the Western market. Maybe there was a huge cultural gap that had yet to be bridged before American and European audience could understand, never mind appreciate our movies. ...read more.

A typical Jackie movie does not have much of a story line. But the moviegoers don't care. They come to see Jackie flip into cars, flop out of trains, and beat the bad guys to a pulp. The combination of Jackie's goofy look and the clever fight scenes, punctuated with comic relief, finds its way to the western v iewers' hearts. Body language is universal and needs no further translation. Jackie Chan's success has opened the door to a different type of action filmmaking. The secret ingredients of HK cinema give the standard Hollywood formulas a new twist. The backing of major American studios and the guarantee of a worldwide distribution does not hurt either. ...read more.

This Chinese-American partnership was later repeated by actors like Chow Yun Fat and Michele Yeoh, in box office hits like "Hard Broiled" and "Tomorrow Never Dies". When Ang Lee's film, "Crouching Tiger, Hidden Dragon", became an international hit, Chow and Yeoh became household names overnight. Ang Lee's "Crouching Tiger, Hidden Dragon" was a major breakthrough for the HK movie industry. It presented the Western audience with an all-out Chinese story, complete with Chinese subtitles. No doubt Ang Lee's talent and the breathtaking cinematography had something to do with the film's success. But perhaps the film also came on the scene at the right time. It has managed to bridge the east-west cultural gap in the movie industry, just when the world is getting more smaller. ...read more.