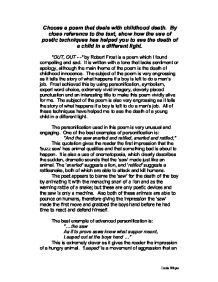 Choose a poem that deals with childhood death. By close reference to the text, show how the use of poetic techniques has helped you to see the death of a child in a different light.

This means that many children were put to work in jobs they should not be doing and when they die another child is there to take their place. Another two techniques, which made the poem extremely colourful, are the very effective and expertly used world choice and vivid imagery: "Then the boy saw all ... He saw all spoiled." This quotation is very cleverly used as the boy was "old enough to know" perhaps that his injury would seriously diminish or 'spoil' his value as a labour. It is also provocative to the reader because if you spoil something, it is ruined forever and you cannot get it back, just like the child's life. Another good example of expert word choice is the closing of the poem: "... And since they Were not the one dead, turned to their affairs." Here Frost uses the irony to illustrate the futility of the "affairs" of the doctor - the real loss of the boy does not matter to watchers since he was no value to them to them. ...read more.

They also add a feeling if suspense and anticipation to the line as the reader is left waiting to find out if he will live or die. It also depicts the slowing of his heartbeat away to "nothing". The title is very interesting as it is a Shakespearian reference to Mac Beth since nothing else in the poem means or symbolises "Out, Out - ". It is a very effective metaphor, which compares the flame of a candle, to a human life. It says that the light has gone out very suddenly and the boy's life has ended before it should have. It also reminds you for just how precious life is. At the end, the poet seems to blame the family and doctor for turning to their affairs. Earlier, the poet seems to blame the family for not giving the boy time to play, but an accident can happen at any time. In conclusion I found "OUT, OUT - -" by Robert Frost a very interesting but sad poem. It helped me to see the death of a child in a different light. It dealt with childhood innocence and used many poetic techniques to show what happens when you lose it. Word count : 1,162 Linda Whyte ...read more.