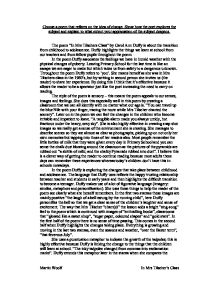 Choose a poem that reflects on the idea of change. Show how the poet explores the subject and explain to what extent your appreciation of the subject deepens.

Choose a poem that reflects on the idea of change. Show how the poet explores the subject and explain to what extent your appreciation of the subject deepens. The poem "In Mrs Tilschers Class" by Carol Ann Duffy is about the transition from childhood to adolescence. Duffy highlights the things we learn at school from our teachers and from fellow pupils throughout the poem. In the poem Duffy associates the feelings we have in humid weather with the physical changes of puberty. Leaving Primary School for the last time is like an escape we are eager to make but which takes us from safety to a dangerous unknown. Throughout the poem Duffy refers to 'you'. She means herself as she was in Mrs Tilschers class in the 1960's, but by writing in second person she invites us (the reader) to share her experience. By doing this I think that it's effective because it allows the reader to be a spectator just like the poet increasing the need to carry on reading. ...read more.

The language that Duffy uses reflects the happy trusting relationship between teacher and students in early years and then highlights the difficult transition to become a teenager. Duffy makes use of a lot of figurative language (imagery: similes, metaphors and personification). She uses these things to help the reader of the poem see clearly what she herself remembers. In the first two stanzas these images are mainly positive "the laugh of a bell swung by the running child", here Duffy personifies the bell so that we get a clear sense of the children's laughter and sense of excitement. The way that Mrs Tilscher "chant(s)" the lesson adds a bright "sing-song" feel to the poem which is continued with images of "enthralling books", classrooms that "glowed like a sweet shop", "sugar paper, coloured shapes" and "gold stars". In the first half of the poem there is no sense of time passing. ...read more.

In the first stanza she uses aural imagery so we can hear what she means. Duffy tells us of Mrs Tilschers chanting in the lesson, the way that she writes the line with sentences made up of only one word that allows us to almost hear the teacher calling out the words. The tone is the way a speaker would say/read the poem. The tone can reveal a greats deal about the speaker's attitude towards the subject, in this case the difference between the innocence of childhood and the troublesome years of adolescence. The tone is established through the language and structure following the pattern of the poem's content. The last two stanza's become uncertain and ominous as growing sexuality causes confusion and irritability "fractions under the heavy sexy sky". This poem can be compared with other poems such as "Valentine" and "Stealing" due to them also using and creating snapshot images. This poem shows the major change and transformation from childhood to adolescence and brings back memories of previous experiences to myself and others who read it. ?? ?? ?? ?? Martin Woolf In Mrs Tilscher's Class ...read more.