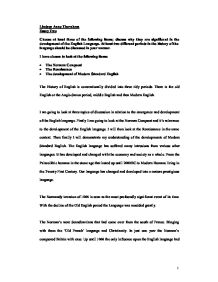 Choose at least three of the following items; discuss why they are significant in the development of the English Language. At least two different periods in the history of the language should be discussed in your answer.

Lindsey Anne Thornham Essay Two Choose at least three of the following items; discuss why they are significant in the development of the English Language. At least two different periods in the history of the language should be discussed in your answer. I have chosen to look at the following items: * The Norman Conquest * The Renaissance * The development of Modern Standard English The History of English is conventionally divided into three tidy periods. There is the old English or the Anglo-Saxon period, middle English and then Modern English. I am going to look at three topics of discussion in relation to the emergence and development of the English language. Firstly I am going to look at the Norman Conquest and it's relevance to the development of the English language. I will then look at the Renaissance in the same context. Then finally I will demonstrate my understanding of the developments of Modern Standard English. The English language has suffered many intrusions from various other languages. It has developed and changed with the economy and society as a whole. From the Palaeolithic humans in the stone age that lasted up until 2000BC to Modern Humans living in the Twenty First Century. Our language has changed and developed into a mature prestigious language. The Normandy invasion of 1066 is seen as the most profoundly significant event of its time. With the decline of the Old English period the Language was moulded greatly. The Norman's were Scandinavians that had come over from the south of France. Bringing with them the 'Old French' language and Christianity. In just one year the Norman's conquered Britain with ease. Up until 1066 the only influence upon the English language had been Latin brought with the invasion or Cesar in 55BC. ...read more.

Because they believed that English gave power to the lower classes, which would create anarchy throughout society. But the reformation played a huge part in the increasing popularity of English. With Henry VIII desire to divorce his wife Catherine and marry Anne Boleyn. His only option was to cut ties with Rome and the Catholic Church and create a Church of England, which was a huge controversy at the time. But those who were involved wanted as many people to read their work as possible and as English was the language that the majority of people could speak, most works were published in English. So English began to establish itself as a major language in the Renaissance. English literature also began to flourish re-enforcing the language. With help of Shakespeare hitting the literary scene. However, Latin was still having a huge influence on English. Mainly, as a result of English becoming so popular, because it was beginning to be used in places of importance. People found constraints within the language that did not allow for them to communicate at a high level. The constraints were mainly just a simple lack of vocabulary. So they began to borrow words mainly from French, Latin and Greek on a mass scale. As these languages had all been seen as prestigious and fashionable languages they created prestige and status within the English language that we had never seen before. Words were borrowed as we may not of had a meaning for something or because some words may have the same meaning on the surface but sometimes you can't use them in the same context. But sometimes people used Latin words when there was already an English word for it, simply to gain status. ...read more.

Also, we should not split infinitives in correct Standard English. For example, 'to boldly go'. But these do have problems in out language because the rules are not based on native speakers and the around the Latin and French languages. So we often don't use them in Modern Standard English. Because in Modern English we do have more variety because it is no longer a synthetic language we are able to experiment with it more. But our language is forever changing. So no publications will ever be representative of the perfect 'Standard English'. Today with the increase of communication, travel, radio and television all different types of English have mixed. Also one major intrusion into our language is the massive amount of American and Australian influence from TV. "The eighteenth century, as we have seen, was a time of consolidation between two periods of change. As we move into the nineteenth century we find the English language spreading and expanding as never before: Its stage becomes rapidly as wide as the whole world, and it adapts itself in a variety of ways to the new industrial society which it must serve". (Cited in Robertson and Cassidy (1954) p 375). The English language is one of the oldest languages in the world. It has suffered many influences from many other languages. It has developed from a non-prestigious language to an internationally spoken language. Also English is the first Language spoken in America and Australia both of whom play very influential roles in the world's economy. For many jobs and situations English has essentially become the gateway. But is only the language it is today because of the influences that it has suffered. It has changed and developed sometimes slowly and sometimes very quickly. But it is still changing and probably won't ever stop. ...read more.