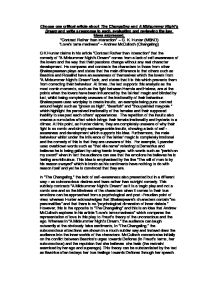 Choose one critical article about The Changeling and A Midsummer Nights Dream and write a response to each, evaluating and reviewing the key ideas expressed. Contrast Rather than Interaction G. K. Hunter (MSND) Loves tame madness

Choose one critical article about The Changeling and A Midsummer Night's Dream and write a response to each, evaluating and reviewing the key ideas expressed. "Contrast Rather than Interaction" - G. K. Hunter (MSND) "Love's tame madness" - Andrew McCulloch (Changeling) G K Hunter claims in his article "Contrast Rather than Interaction" that the comedy of "A Midsummer Night's Dream" comes from a lack of self-awareness of the lovers and the way that their passions change without any real character development. He compares and contrasts the characters to those from other Shakespearean plays and states that the main difference is that others such as Beatrice and Rosalind have an awareness of themselves which the lovers from "A Midsummer Night's Dream" lack, and states that it is this which prevents them from correcting their behaviour. At times, the text supports this analysis as the most comic moments, such as the fight between Hermia and Helena, are at the points when the lovers have been influenced by the fairies' magic and blinded by l**t, whilst being completely unaware of the irrationality of their behaviour. ...read more.

Whereas in "A Midsummer Night's Dream," the audience can laugh outwardly at the obviously false sentiments, in "The Changeling," the subconscious attractions are shown in a much subtler way and instead draw the audience into the inner worlds of the characters. McCulloch concentrates initially on the conflict between Beatrice's urges towards Deflores (in Freud's terms, her subconscious) and the repulsion that she believes she feels (the restraint exercised by her ego and superego). This theory can be substantiated by the text as Beatrice often betrays her true feelings towards Deflores through her speech. She refers to him as a "serpent", which is intended as an insult and yet has connotations with temptation and the Garden of Eden - and, by association, the fall of women through sin, prophetic of the way that their storyline plays out. She describes how he "more disturbs (her) / than all (her) other passions" which is meant to show loathing but in fact shows the profound effect that he has on her for somebody that she claims to not care about. McCulloch goes on to argue that it is the conflict within Beatrice that destroys her and makes her descent inevitable - whilst the ...read more.

However, in "The Changeling", McCulloch argues that it is contrast rather than similarities which drive the play - Isabella remains sane surrounded by madmen whilst Beatrice becomes mad surrounded by those who are sane. The plots also work by being opposites - whilst Beatrice betrays the trust of all around her, Isabella proves that she can be trusted to win her freedom. Additionally, whilst Isabella shows insight and intelligence by suspecting Antonio to be false - something that the characters of " A Midsummer Night's Dream" cannot see in themselves - Beatrice believes throughout that she is acting rationally and yet is doing the opposite, submitting to her subconscious. The link between Beatrice and Isabella is emphasised by the link between love and illness or madness - Deflores is referred to as an "infirmity", just as Shakespeare draws comparisons between "lovers and madmen". Overall, the two articles explore similar areas of these two plays and whilst both deal with similar themes there are in fact some subtle differences which account for the difference in tone of the plays. The comedy of "A Midsummer Night's Dream" lies in the lack of self-awareness of the protagonists, whereas in "The Changeling" it is exactly this which leads to confusion and ultimately a tragic end. ...read more.