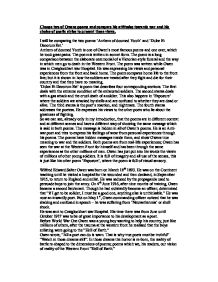 Choose two of Owens poems and compare his attitudes towards war and his choice of poetic styles to present these views.

Choose two of Owens poems and compare his attitudes towards war and his choice of poetic styles to present these views. I will be comparing the two poems 'Anthem of doomed Youth' and 'Dulce Et Decorum Est.' Anthem of doomed Youth is one of Owen's most famous poems and one over, which he took great pains. The poem is written in sonnet form. The poem is a long comparison between the elaborate ceremonial of a Victorian-style funeral and the way in which men go to death in the Western Front. The poem was written while Owen was in Craiglockhart war Hospital. He was expressing his views and personal experiences from the front and back home. The poem compares home life to the front line; but it is shown in how the soldiers are treated after they fight and die for their country and that they have no meaning. 'Dulce Et Decorum Est' is poem that describes four corresponding sections. The first deals with the extreme condition of the exhausted soldiers. The second stanza deals with a gas attack and the cruel death of a soldier. This also happens in 'Exposure' where the soldiers are attacked by shells and are confused to whether they are dead or alive. The third stanza is the poet's reaction, and nightmare. The fourth stanza addresses the poetess. He expresses his views to the other poets who lie about the greatness of fighting. So we can see, already only in my introduction, that the poems are in different context and at different scenes and have a different way of showing the same message which is said in both poems. The message is hidden in all of Owen's poems. He is an Anti- war poet and tries to express his feelings of wear from personal experiences through his poems. The poems have hidden messages inside them, and show Owens true meaning to war and the soldiers. ...read more.

In stanza two Owen translates his personal experience of a gas attack into seven lines. 'An ecstasy of fumbling,' is a phrase, which evokes both the sharpness of fear and the clumsiness of exhaustion. This phrase is an oxymoronic; it is a figure of speech, which brings together two contradictory terms. The boys are fighting for their life or death. If they are not quick enough, its death. "gas! GAS!" this I feel is a cacophony on the front line in war. To all the soldiers this is the sound of their life running before their eyes if they have no gas helmet. "Clumsy, Shaken" the boys are petrified and scared, they have no time to think. It emphasizes the fact that the soldiers are ill equipped, this is also shown in stanza one, 'many had lost their boots.' Owen then goes on to describe how one soldier hadn't found his helmet on time; 'someone was still yelling.' Owen does not give the soldier any identity, they are just boys that nobody knows and will never be remembered. He uses an image of drowning through the pane of sea green glass in his mask. This description is from Owen's view of his mask. He then describes the death of a soldier in a gas attack. "I saw him drowning." His use of 'I' makes us engulfed it feels personal and realistic. His use of the metaphoric language, 'drowning' is effective. He is literally drowning as his lungs fill up with poisonous gas, and Owen sees him drowning like under the sea. This use of metaphoric language is used in most of Owen's poems, to expresses his feelings and his sights at the front line. "In all my dreams" Owen has used this delirious effect of dreaming in 'Exposure' when they are confused to whether they are dying or sleeping. "So we drowse" the soldiers here are sleepy due to the cold weather. ...read more.

But the effect is hard to see, in poem two the effect of the images is powerful because it is written there are the description is more horrific, but in poem one we read less about the description, just more about the dignity and no respect. Owen writes that the soldiers are not worthy of a funeral. But in poem two we read the death of a solider and we feel sick and sad of this. His intended reaction for poem one was to show the people who aren't fighting in war or who are thinking to, is that not everybody gets noticed and they are not treated with respect. He wanted to save the young people and warn people and try to influence them not to go to war unless you are trained. In poem two his audience is mainly the other poets and warns them not to lie because of the tragedies happening on the front. He uses more descriptive language so Jessie Pope can understand more clearly what life is like. Both poems have impact, but in different ways, they both are the same, but give their message in a different way. War today is very different. We are today experiencing war, but it is nothing like war back in 1917. The war in Iraq is not about land. The soldiers are not dying in masses, and never coming back. Only a small amount of soldiers have died. I have not had personal experience of war. I have seen small effects like the 'Twin Towers' on September 11th. But Owen experienced something that millions of others did, and in poems he describes a lifetime in a short poem. He has written famous poems, which cannot be beaten by or compared their power because Owen was one of the few who expressed his views without care of what might happen. That is why he is admired and one of the many soldiers who are not forgotten. But he is remembered for his poems not his help in the war. ...read more.