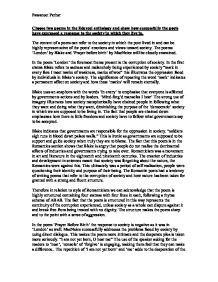 The content of a poem can refer to the society in which the poet lived in and can be highly representative of the poets’ emotions and views toward society. The poems ‘London’ by Blake and ‘Prayer before birth’ by MacNeice will be closely examined.

In the poem ‘London’ the foremost theme present is the corruption of society. In the first stanza Blake refers to sadness and melancholy being experienced by society “mark in every face I meet marks of weakness, marks of woe” this illustrates the oppression faced by individuals in Blake’s society. The significance of repeating the word ‘mark’ indicates a permanent affect on society and how these ‘marks’ will remain eternally.

Blake uses an anaphora with the words ‘In every’ to emphasise that everyone is affected by governments actions and by leaders. ‘Mind-forg’d manacles I hear’ The strong use of imagery illustrates how society metaphorically have chained people in following what they want and doing what they want, diminishing the purpose of the ‘democratic’ society in which we are supposed to be living in. The fact that people are chained down emphasises how there is little freedom and society have to follow what governments say to be accepted.

Blake indicates that governments are responsible for the oppression in society. “soldiers sigh runs in blood down palace walls.” This is ironic as governments are supposed to be support and guide society when truly they are to blame. The fact that this poem is in the Romantics section shows that Blake is angry that people do not realise the detrimental affects of industries and governments trying to take over. Romanticism was a movement in art and literature in the eighteenth and nineteenth centuries. The creation of industries and development in sciences meant that society was forgetting about the nature, the Romantics were against this. This ultimately was a period of self realisation, people were questioning their identity and purpose of their being. The Romantic poets had a tendency of writing poems that refer to the corruption of society and how nature has been taken for granted with a strong and fluent structure.

Therefore in relation to style of Romanticism we can acknowledge that the poem is highly structured containing four stanzas with four lines in each, following a rhyme scheme of ABAB. The fact that the poem is structured in this way represents the continuity of the corruption experienced, unless society as a whole can dispute against it and break free from being treated with no dignity. The structure makes the poem sharp and to the point with a sense of aggression.

In the poem ‘Prayer Before Birth’ the response to society is negative as it was in ‘London’ as well. MacNeice successfully addresses the problems faced by society by using direct dialogue. This makes the poem more intimate and the desperate plea is taken more seriously. “I am not yet born, O hear me” The use of the speaker asking for the readers to ‘hear’, ‘console’ of ‘forgive’ is engaging, making them feel that they can make a difference.. The repetition of ‘I am not yet born’ and ‘me’ adds to the desperation of the speaker for a change in society to be made. It make it more personal and it a call out to the reader, making them attentive.

The speaker fears that humanity will look for flaws and degrade them. “blow me like a thistledown hither”. Illustrating how MacNeice’s society is demanding and people want to put other downs to appear as the most superior.

The stair like structure of the poems illustrates steps leading to a downfall in society. However, steps can also go up meaning that there is potential for change the idea of hope has been formed in an extremely discreet way. Generally the stanzas progressively get bigger illustrating the anxiety towards the end of the poem. ‘Let them not spill me. Otherwise kill me’ the fact that it has come to a point in society where people question whether they want to have children because of the corruption in society explicitly demonstrates the significance of the situation.

In conclusion both Blake and MacNeice successfully show a response to the society in which they live in. Blake does this by a fluent and detailed structure exploring repetition, anaphoras and oxymoron’s enabling him to do express the effects of society with more passion.  ManNeice effectively uses the first person to call out to the reader keeping the reader engaged, ultimately making the aware of the reality of ‘democracy’ and the downfall mankind. Both poems enable the reader to ponder on the subject matter and question society and its norms and values.