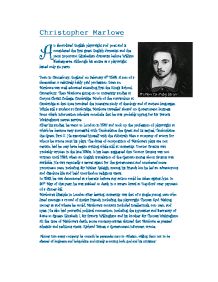 Christopher Marlowe A n short-lived English playwright and poet and is considered the first great English dramatist and the most important Elizabethan dramatist before William Shakespeare. Although his entire as a playwright lasted only six years. Born in Canterbury, England on February 6th 1564. A son of a shoemaker, a relatively baldy paid profession. Even so, Marlowe was well educated attending first the King's School, Canterbury. Then Marlowe going on to university studies at Corpus Christi College, Cambridge. Much of the curriculum at Cambridge at that time involved the intensive study of theology and of ancient languages. While still a student at Cambridge, Marlowe travelled aboard on Government business from which information scholars conclude that he was probably spying for Sir Francis Walsingham's secret service. ...read more.

It has been suggested that Doctor Faustus was not written until 1592, when an English translation of the German stories about Faustus was available. He was reputedly a secret agent for the government and numbered some prominent men, including Sir Walter Raleigh, among his friends but he led an adventurous and dissolute life and held unorthodox religious views. In 1593, he was denounced as a heretic before any action could be taken against him. In 30th May of that year, he was stabbed to death in a tavern brawl at Deptford over payment of a dinner bill. Marlowe's lifestyle in London after leaving university was that of a single young man who lived amongst a crowd of similar friends, including the playwright Thomas Kyd. ...read more.

Steane writes an introduction to Christopher Marlowe: the Complete Plays (Penguin 1969, p.16) were he argues for a strong intellectual relationship between Marlowe and his creation: It was a very individual mind that created as he created: and what we see as we read is a whole mind involved, not simply or primarily the craftsman's concern with techniques, like a shoemaker's, or a professional rhetorician's. Moveover Marlowe concerned himself recurrently with certain ideas, feelings, and aspects of life: these were what interested him.... It must also be recognised that it is a possible but not inevitable source of distorted judgement on the work. During his short life he wrote four principle plays, three of which were published posthumously. The poems he wrote were: * Tamburlaine the Great (1590) * Edward II (1594) * The Tragical History of Doctor Faustus (1588?) * The Jew of Malta (1633) * Massacre at Paris (1600) ...read more.