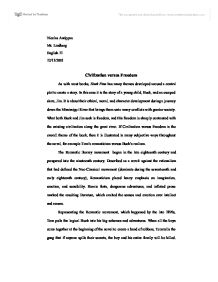 Nicolas Antippas Mr. Lindberg English 11 12/11/2001 Civilization versus Freedom As with most books, Huck Finn has many themes developed around a central plot to create a story. In this case it is the story of a young child, Huck, and an escaped slave, Jim. It is about their ethical, moral, and character development during a journey down the Mississippi River that brings them unto many conflicts with greater society. What both Huck and Jim seek is freedom, and this freedom is sharply contrasted with the existing civilization along the great river. If Civilization versus Freedom is the overall theme of the book, then it is illustrated in many subjective ways throughout the novel, for example Tom's romanticism versus Huck's realism. ...read more.

Representing the Romantic movement, which happened by the late 1870s, Tom pulls the logical Huck into his big schemes and adventures. When all the boys come together at the beginning of the novel to create a band of robbers, Tom tells the gang that if anyone spills their secrets, the boy and his entire family will be killed. The exaggerated purpose of the gang is very comical by itself. The gang succeeds in raiding a Sunday school picnic party. The more Tom tries to convince Huck and the rest of the boys that they are stealing jewelry from Arabs and Spaniards, the funnier and the more comical the situation of the relationship between Huck and Tom becomes. ...read more.

In this manner, the wrongful belief that nineteenth-century American society, especially in the south, had overcome its racial prejudice and hatred is as ludicrous as Tom's extravagant and unrealistic plan to save the slave, Jim, from the Phelps farm. On the contrary, Huck questions the validity and the degree of reality of the society around him, including its religious teachings and social laws. But, because Huck believes that Tom's education and upbringing make his judgment sound, correct and reliable, Huck feels that he is destined for hell for all his wrongful decisions. The contrast between Huck's realism and Tom's romanticism is believed to be a condemnation on Mark Twain's part, of a society that was still divided, incoherent and unequal, without unified freedom, even after the Emancipation Proclamation. ...read more.