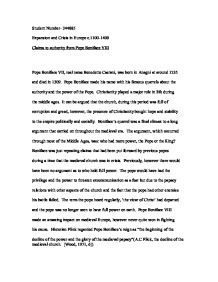 Student Number- 344885 Expansion and Crisis in Europe c.1100-1400 Claims to authority from Pope Boniface VIII Pope Boniface VII, real name Benedetto Caetani, was born in Anagni at around 1235 and died in 1309. Pope Boniface made his name with his famous quarrels about the authority and the power of the Pope. Christianity played a major role in life during the middle ages. It can be argued that the church, during this period was full of corruption and greed, however, the presence of Christianity bought hope and stability to the empire politically and socially. Boniface's quarrel was a final climax to a long argument that carried on throughout the medieval era. The argument, which occurred through most of the Middle Ages, was: who had more power, the Pope or the King? Boniface was just repeating claims that had been put forward by previous popes during a time that the medieval church was in crisis. Previously, however there would have been no argument as to who held full power. The pope would have had the privilege and the power to threaten excommunication as a fear but due to the papacy relations with other aspects of the church and the fact that the pope had other enemies his battle failed. ...read more.

(Wood, 1974, 4) In the year 1300, Pope Boniface announced there to be a Jubilee where pilgrims had the opportunity to come from far and wide to repent their sins by visiting the tombs of the apostles during that year. It had been reported, that about 200,000 pilgrims were constantly in the city of Florence. Demonstrating that people still felt strong for their religion, as people travelled form as far as England -which was quite a distance in them days. There are many reasons historians have thought of to why exactly did the pope call this pilgrimage? The one in which seems more correct is that he was trying to regain faith in Christianity, as he saw it was being lost. By doing this he may have thought it would entitle him to more authority when it came to Europe's affairs. There were other suggestions that he was hoping to raise money for Rome, again giving him a head start with the king of France if he had more funds behind him. (Wood, 1974, 40) In the mean time the king of France was abusing the royal privileges that Boniface allowed him, therefore six years after the Clericis laicos Pope Boniface bravely sought another form of direct attack with his new bull Unam Sanctam (1302), in which it ...read more.

did not help that the pope had other issues to use against him such as enemies in Rome and the other events occurring, that led to the pope leaving France and England to their own affairs at the beginning of the dispute. Boniface was up against what it seems as a hard faced king, when it comes to Richard. There is not much detail on him but on the trial of Bishop Bernard Saisset an eyewitness described him; "Our king resembles an owl, the fairest of birds, but worthless . He is the handsomest man in the world, but he only knows how to look at people unblinkingly without speaking". (Wood, 1974, 82) proving how difficult it must have been for the pope to be up against somebody who had no emotion who went for what he wanted, using all sorts of tactics. The battle of the holy and the monarchy had been arousing all throughout the medieval period, in my opinion change was bound to occur one day and it took an enterprising person such as King Philip to achieve this. I have no doubt the pope tried his hardest to stop the occurrence-whether it being because he was extremely strong willed or because of his councils but died due to this without victory. Word Count= 2110 ...read more.