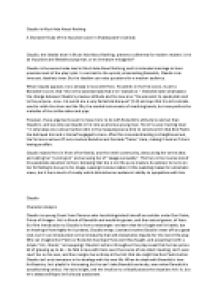 ﻿Claudio in Much Ado About Nothing A Character Study of the Impulsive Lover in Shakespeare's Comedy Claudio, the idealist lover in Much Ado About Nothing, presents a dilemma for modern readers: is he an impulsive and likeable young man, or an immature misogynist? Claudio is the second male lead in Much Ado About Nothing, and his intended marriage to Hero provides most of the play?s plot. In contrast to the cynical, wisecracking Benedick, Claudio is an innocent, idealistic lover. But his idealism can raise questions for a modern audience. When Claudio appears, he is already in love with Hero. He admits in the first scene, much to Benedick?s scorn, that ?she is the sweetest lady that e?er I looked on.?. Benedick later emphasizes the change between Claudio?s previous attitude and his new one: ?He was wont to speak plain and to the purpose...now...his words are a very fantastical banquet? (II.2) and says that his old comrade used to relish the drum and the fife, the martial instruments of marching bands, but now prefers the melodies of the civilian tabor and pipe. However, these arguments seem to have more to do with Benedick?s attitude to women than Claudio?s, and we only see Claudio in his role as amorous young man. ...read more.

He lacks insight, and the intuition to critically assess the situations he?s in, but he?s always willing to be furiously passionate. His passionate feelings, and the enthusiasm with which he gives himself up to his emotions, are as marked as his immaturity. When Claudio loves Hero, he loves her to distraction. When he hates her, he hates her with fury. When he teases Benedick, he teases mercilessly. When he realizes he has wronged Leonato, he?ll do anything to win Leonato?s forgiveness. He mourns Hero like one who will never love again, and then happily will marry whoever Leonato puts in front of him the next morning. Only when he sees Hero again does he simply say "Another Hero!" with no more gushing. This is suspect ? perhaps this means he?s learned his lesson about being too effusive, and he?s now cowed by his modesty. But actually, no. He speaks again, and his last words in the play are to tease Benedick about inevitable disloyalty in Benedick?s marriage. Sometimes a character?s last lines can be as telling as their first lines ? through Claudio?s farewell in the play, we see that he hasn?t learned all that much. He?s still prone to youthful idiocy, and it makes us wary that perhaps he?ll be as prone to youthful rashness as well. ...read more.

This shows that his attraction to her is purely of outward beauty and he only guesses at her inward beauty; he trusts his eyes solely on who is to be his future wife but can also somehow denounce her and cause her shame. He sees her outer beauty but can only guess at her inner beauty until he learns of her innocence from 'The Watch', at which point her inner beauty is revealed to him, and he believes he will never find another woman of equal worth, and will stoop to marry an Ethiope.(V.iv. 38) Leonato offers him the hand of Hero's look-alike, one of Leonato's nieces, and he accepts. When the Hero look-alike comes forth her true identity is revealed to Claudio, and he realizes that his love for her is true. Beatrice and Benedick are overconfident in their actions, and as a result muddle their love affair. Claudio and Hero are not confident in their feelings or desires, and their lack of action muddled their relationship, and allowed trickery to step in (Brown 122). Beatrice is a strong woman firm in her ideas of not succumbing to a man, becoming his wife, and Benedick is as firm in his belief of not marrying a woman, and is referred to as "being committed to a war against the ladies." They learn to trust their feelings more than their observations of character and witty remarks to each other and as a result see inward beauty in each other. ...read more.