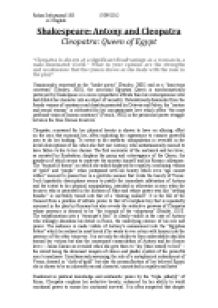 Cleopatra is always at a significant disadvantage as a woman in a male-dominated world. What in your opinion are the strengths and weaknesses that the Queen shows as she deals with the men in the play?

﻿Rohan Sathyanand 13G 17/09/2012 A2 English Shakespeare: Antony and Cleopatra Cleopatra: Queen of Egypt ?Cleopatra is always at a significant disadvantage as a woman in a male-dominated world.? What in your opinion are the strengths and weaknesses that the Queen shows as she deals with the men in the play? Unanimously renowned as the ?harlot queen? [Stanley, 2001] and as a ?lascivious courtesan? [Stanley, 2001], the mercurial Egyptian Queen is anachronistically portrayed by Shakespeare in a more sympathetic attitude than his contemporaries who had diluted her character into an object of carnality. Ostentatiously dissimilar from the female visions of constancy and chastity presented by Octavia and Fulvia, the ?mature and s****l woman? is celebrated for her compassionate love which offers ?the most profound vision of human constancy? [French, 1982] in the patriarchal power struggle between the three Roman triumvirs. Cleopatra, renowned for her physical beauty is shown to have an alluring effect on the men that surround her, often exploiting her appearance to ensnare powerful men to do her bidding. Te extent to her aesthetic manipulation is revealed in the lavish descriptions of her when she first met Antony, who instantaneously seemed to have fallen victim to her charms. ...read more.

Simultaneously assuming the role of a metaphorical embodiment of Venus, dressed in ?cloth-of-gold? but also the personification of her beloved Egypt, she is shown to be an inherently s****l character, unmatched in regality and lustre. Shadowed in political knowledge and militaristic power by the ?triple pillar[s]? of Rome, Cleopatra employs her seductive beauty, enhanced by her ability to wield emotional power to ensure her continued survival. It is often suspected that despite her ?infinite variety? and oscillating moods, her actions always contain a ?deliberate logic? [Danby, 1952]. Her uncanny strength in mentally manipulating Antony is clearly visible in the opening scenes of the play, at the arrival of the messengers at which she suggests that Antony hear them, despite his rejection of them. Cleopatra quickly weaves an intricate yet sarcastic response to the possibilities of the incoming news, whether it is from the ?shrill-tongued Fulvia? asking to do his bidding or even a ?dismission? from Caesar. Antony, unknowing of her true intentions continues to praise the matriarch and her kingdom, eagerly hoping to show her that his interests do not lie in elsewhere even going so far as to condemn the ?ranged empire [to] fall?. ...read more.

The use of poisoned would suggest that the carnal love which the pair share is self-destructive and share no deeper inherent meaning. In time Antony?s oscillation is evidence to the faltering of their love in that he blames Cleopatra for the defeat at Actium, even threatening wildly to kill her. Though she had failed in maintaining control over Antony, she quickly remedies the situation, shedding tears which ?instantly melt his anger? into a ?hollow-sounding heartiness? [French]. Thus it becomes evident that any weaknesses that Cleopatra exhibits is a result of her overpowering strengths and that she has the uncanny ability, as Enobarbus suggests of turning even her defects into her strengths. Despite being dominated in the fundamental conflict within the novel between the three triumvirs in their inherently ?masculine? aim for dominance, Cleopatra?s forte appears in the form of emotional control which is summarised through the volatile relationship of Anthony and Cleopatra: the fusion between the antithetical personalities, the former which embodies ?order, morality and maturity? of Rome whereas the latter embodies the ?chaos, immorality and immaturity? of Egypt. Cleopatra is ultimately flawed in comparison to the ideal feminine form of the Elizabethan society yet Shakespeare presents her as a triumphant tragic figure who possesses immense emotional power. ...read more.