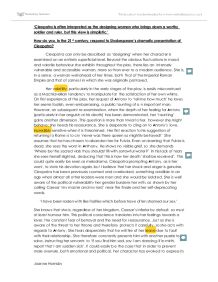 'Cleopatra is often interpreted as the designing woman who brings down a worthy soldier and ruler, but this view is simplistic.' How do you, in the 21st century, respond to Shakespeare's dramatic presentation of Cleopatra?

'Cleopatra is often interpreted as the designing woman who brings down a worthy soldier and ruler, but this view is simplistic.' How do you, in the 21st century, respond to Shakespeare's dramatic presentation of Cleopatra? Cleopatra can only be described as 'designing' when her character is examined on an entirely superficial level. Beyond the obvious fluctuations in mood and volatile behaviour she exhibits throughout the play, there lies an intensely vulnerable and accessible woman, more so than ever to a modern audience. She is, in a sense, a woman well ahead of her times, both that of the Imperial Roman Empire and that of James I in which she was originally portrayed. Her volatility, particularly in the early stages of the play, is easily misconstrued as a Machiavellian tendency to manipulate for the satisfaction of her own whims. On first experience of the play, her request of Antony to 'tell me how much' he loves her seems foolish, even embarrassing, a public taunting of an important man. However, on subsequent re-examination, when the depth of her feeling for Antony (particularly in her anguish at his death) has been demonstrated, her 'taunting' gains another dimension. This question is more than trivial to her, however she might behave; she needs his reassurance. ...read more.

There is a sense of the hindsight granted by age and the comparison between relationships current and former, the latter seeming now like a mistake. It is principally in this way that I believe Cleopatra is more relevant to modern audiences than to Jacobean society. The idea of a female leader would be, after the reign of Elizabeth I, relatively unsurprising; however, women were still regarded as the property of men. It is not hard to see why a modern career woman, having gone through several relationships of her own, would find more to relate to in Cleopatra than would a Jacobean housewife. Women in the 21st century hold a much more three dimensional position than those of Shakespeare's time. They were considered then unsuitable for the stage, replaced instead by 'some squeaking Cleopatra boy' playing Cleopatra 'i'th'posture of a w***e'. Female sexuality in Jacobean times was considered, as written by Penny Gay, to be 'voraciously overwhelming', and since Cleopatra embodies that idea to the core, she would have seemed a dangerous character indeed to her first audiences. Then, she was a strange, exotic creature and an unknown quantity, but her character inspires altogether more empathy in more modern performances. In her portrayal by Judi Dench at the National Theatre in 1987, her suicide represented a 'grand resignation' as opposed to a dark, frenzied retreat; her attachment to Anthony was 'pathetically touching'. ...read more.

Together, Antony and Cleopatra rise above pragmatism and politics, and it is small wonder that they stun even Octavius, or that he should be moved by 'a pair so famous'. I think it would be a dire injustice to call Cleopatra 'designing' and blame her for Antony's political downfall; it reduces her feverish passion, her wild hedonism and the staggering extent of her love to plotting, cunning and cruelty. To me, she represents a woman of enormous courage, in her leadership but also in her refusal to compromise on emotions, however unreasonable or dramatic they might be. She is foolish, yes, but never a coward; her flight from Actium is not desertion but evidence of military inexperience and genuine fear. Her love for Antony is beyond the ordinary, it is beyond Caesar and Octavia, and how could the play be so poignant a 'tragedy' were that not so? The very sadness of Antony & Cleopatra is in the fact that the two lovers can only triumph beyond the grave, in the death of love for the pursuit of politics; an unworthy substitution if ever there was one. Cleopatra is no Iago, she has none of his manipulative malice; she is nothing more or less than a woman passionately and shamelessly in love. ...read more.

It is evident here how a thoughtful title can help to give an essay structure and direction. The writer has given a lively and sophisticated response to a well-phrased question. The particular strengths of the essay lie in its sense of personal engagement with the text, and its ability to mount a persuasive argument, effectively backed up by textual reference. Perhaps the essay loses its focus at one point, and it would benefit from more extensive use of quotation, but overall this is excellent work.
*****

This is an excellent and technical essay with a very strong understanding of alternative interpretations and a good grasp of context, and it only needs minor improvements to its style and tone. The quote in the question contains the phrase ...

This is an excellent and technical essay with a very strong understanding of alternative interpretations and a good grasp of context, and it only needs minor improvements to its style and tone. The quote in the question contains the phrase "often interpreted", which means the student needs to address alternative interpretations of Cleopatra. The student goes on to do this well: by saying things such as "This could quite easily be seen as...", they are showing that they understand that nothing is certain when interpreting a text. (In this particular play, it is a good idea to pick up on what this student is arguing here, which is that several things Cleopatra says could be seen as melodramatic, or alternatively could be seen as genuine. When studying this play, I found that this set of opposing interpretations were applicable to many things Cleopatra says. Are her emotional outbursts attention-seeking, or is true sensitivity shining through?)

The student takes this further by using quotes from other people who have written about the text - for example, "as written by Penny Gay..." - which is excellent, as it not only shows a developed understanding of the need for alternative interpretations, but it shows that the student has read widely around the subject. Furthermore, references to different portrayals of Cleopatra - such as "of Janet Suzman" - show that the student understands how different interpretations can affect audience reactions. The student's response to the question is enhanced even more by the way they quote words from the question in their answer: for example, "There is no 'design' to her" shows that the student has engaged so well with the question that they can answer specific parts of it as well as on the whole.

The student's use of technical vocabulary - "hyperbolic", for example - is excellent because it shows they have a strong understanding of what is used to create a text, rather than a vague idea. "Hyperbolic" in particular sounds better because it is a word that is largely specific to literature - it is better than "exaggerated", which means the same thing, because that is a word not specific to this subject. The judgements made in the essay are excellent: "...see his decision to value Cleopatra's love over Roman politics as an ascent rather than a fall" is very good because it shows the student fully understands the text and can use that understanding to make a decision on their opinion of a character. This is sustained throughout and leads to a conclusion that is strong because it ultimately answers the question posed, showing the student is on task and is writing about what they were asked, not what they wished they were asked.

The context used in this essay is excellent. The student shows that they have read other works of Shakespeare - such as "Cleopatra is no Iago", a reference to a cunning antagonist in Othello - which is good as it shows a developed understanding of the influences behind the text. References to the historical context - the "Jacobean" period - are excellent for the same reason. However, it is particularly relevant here only because the question specifically asks for it: it is best to be careful and check with your teacher which parts of the exam require context, because different exam boards require different things for each question.

The spelling, punctuation and grammar in this essay is excellent, which means the examiner is not left working out what the student means, and the essay has a logical flow that makes the argument easy to follow. However, the student has a tendency to exaggerate things while analysing, by using words and phrases such as "incredibly" and "dire injustice", which creates an informal tone that is not appropriate for an A Level essay that is analysing a serious piece of literature. Furthermore, starting a paragraph with "But what of Antony?" is too informal for an essay. It would also be better for the student to avoid using phrases such as "I think..." because "I" makes the essay sound like a personal interpretation, when the aim is to address several interpretations. Nonetheless, these are small criticisms that do not stop this essay being of excellent, 5 star quality.