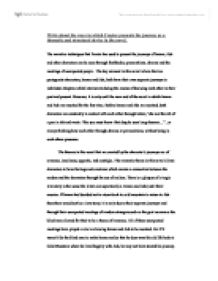 Write about the ways in which Frazier presents the journey as a thematic and structural device in the novel. The narrative techniques that Frazier has used to present the journeys of Inman, Ada and other characters can be seen through flashbacks, premonitions, dreams and the meetings of unexpected people. The key element in this novel is how the two protagonist characters; Inman and Ada, both have their own separate journeys in individual chapters which interweave during the course of knowing each other in their past and present. However, it is only until the near end of the novel in which Inman and Ada are reunited for the first time. Before Inman and Ada are reunited, both characters are constantly in contact with each other through letters, 'she wet the nib of a pen in ink and wrote: 'this you must know: that despite your long absence...'', or always thinking bout each other through dreams or premonitions, without being in each others presence. ...read more.

If Ada had not looked into a well to have seen a man travelling her way, what was stopping her from leaving? Therefore all these unplanned events that the characters encountered played a role to allow them to have their journey, which therefore allows us to have a story. The novel is not only based on romance but also a theme carried on from it is the idea of arrival and survival. Arrival being the reunion of both Inman and Ada and survival related to Darwin's theory of survival of the fittest. Darwin's theory can be presented through the character Ruby. Ruby's mother had died and her father had been an alcoholic that left her when she was a child. The night Ruby was stuck on a briar in the woods, all alone in the dark, when she was only four years old. She spent a night alone with only nature around her. ...read more.

This theme of opposition runs throughout the novel in many ways. With Inman he goes from sin to redemption when he had been in the civil war and had killed to making a 'vow to a bear' never to kill and eat it, from being wounded on the neck from the war to being healed from the goat woman who gives him medicine, from being lonely to finding love in Ada. Ada goes from innocence to maturity, as she spent more time with Ruby, Ada became more independent. From having lost Monroe to finding love in Inman and from also being wounded to being healed in the sense that at the start she was wounded by a cockerel and near the end of the novel she shoots the chickens. It is not only characters who experience the effect of such contrast between two different things; it is also seasons how it goes from warm to cold. This all helps to structure the novel. ?? ?? ?? ?? ...read more.