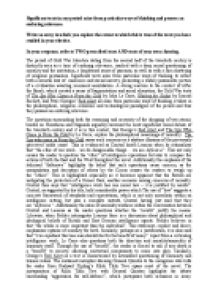 Cold War Literature - the particular ways of thinking present throughout the Cold War period largely influenced the composition of The Spy Who Came in from the Cold, Waiting for Godot, and Red Alert.

﻿Significant texts in any period arise from particular ways of thinking and possess an enduring relevance. Write an essay in which you explore the extent to which this is true of the texts you have studied in your elective. In your response, refer to TWO prescribed texts AND texts of your own choosing. The period of Cold War literature dating from the second half of the twentieth century is distinctly seen as a time of enduring relevance; marked with a deep moral questioning of morality and the institution, a heightened sense of paranoia, as well as with a firm shattering of religious persuasion. Significant texts arise from particular ways of thinking to reflect both a societal loss of innocence and social naivety, presenting a widely pessimistic picture of a civilisation awaiting imminent annihilation. A strong reaction to the context of After the b**b, which created a sense of fragmentation and social alienation, the Cold War texts of The Spy Who Came in From the Cold by John Le Carre, Waiting for Godot by Samuel Beckett, and Peter Georges? Red Alert all arise from particular ways of thinking evident in the philosophical, religious, economic and technological paradigms of the period and thus they possess an enduring relevance. ...read more.

This, in addition to the granting of permission to destroy an un-evacuated Atlantic city so that ?few would have to suffer for the sake of many? highlights contempt for political institutions making decisions for the world, who through the use of alliteration are ?powerless to prevent?. This also relates to Fiedler?s belief in that it is ?expedient that one man should die for the benefit of many?. Thus through the questioning of morality in Cold War society, both Le Carre and George, present texts which both depict highly differing perspectives of their surrounding world and which are, to a large extent shaped by the particular ways of thinking present at the time. Thus both texts possess an enduring relevance through the challenging of ideas such as morality and the presence of seeming amorality. The Cold War era was one of permeating anxiety, vulnerability and fear especially pertaining to the fatal flaws of science, as well as to those attributed to the human condition as conveyed in Peter George?s Red Alert and Samuel Beckett?s Waiting for Godot. Winston Churchill?s 1946 Sinews of Peace alleged that ?with cooperation?in science?there will be an overwhelming sense of security?[1]. Red Alert is a text, seemingly devoted to the disproving of this affirmation. ...read more.

Similarly, the novel sustains repetition of an image haunting Leamus; that of a ?small car smashed between great lorries and the children waving cheerfully through the window?. The obvious conclusion drawn by readers is of the lorries as a metaphor for the ideological conflict between East and West, communism and democracy. The small car on the other hand has numerous connotations potentially being Leamus, society in general as a helpless unit, or even the opposing nations caught in between the ideological forces. The ?children waving cheerfully? presents an image of innocence, and lack of awareness, a stark contrast to the looming lorries. Thus, The Spy Who Came in from the Cold reflects, to a very large extent the political atmosphere of the Cold War, and thus possesses enduring relevance as a depiction of reality for many throughout the era. Thus, the particular ways of thinking present throughout the Cold War period largely influenced the composition of The Spy Who Came in from the Cold, Waiting for Godot, and Red Alert. The permeating philosophical, scientific, political and religious paradigms give all three texts an enduring relevance in the modern, twenty-first century context. ________________ [1] Churchill, W 1946, ?Sinews of Peace? [2] Kennedy, JF 1961, ?Address to the United Nations General Assembly? [3] Clausis, C ?Bad Habits Whilst Waiting for Godot: The Demythification of Ritual? ...read more.