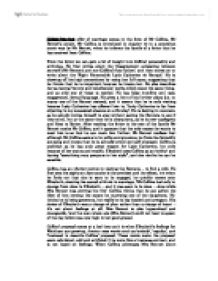 Collins' Proposal Elizabeth's first offer of marriage comes in the form of Mr Collins, Mr Bennet's cousin. Mr Collins is introduced in chapter 13 in a somewhat comic way by Mr Bennet, when he informs the family of a letter that he has received from Collins. From the letter we can gain a lot of insight into Collins' personality and attitudes. He first writes about the 'disagreement subsisting between yourself (Mr Bennet) and my (Collins') late father', and then moves on to write about the 'Right Honourable Lady Catherine de Bourgh'. He is showing off his high connections by using her full name, suggesting that he thinks that he is important because he knows her. He also describes her as having 'bounty and beneficence', words which mean the same thing, and so only one of these is needed. He has false humility and uses exaggerated, formal language. He gives a hint of his further plans (i.e. to marry one of the Bennet sisters), and it seems that he is only visiting because Lady Catherine has allowed him to, 'Lady Catherine is far from objecting to my occasional absence on a Sunday'. ...read more.

Mrs Bennet is also hypocritical and changeable, 'and the man whom she (Mrs Bennet) could not bear to speak of the day before was now high in her good graces'. Collins' proposal comes at a bad time as it is when Elizabeth's feelings for Wickham are growing. Austen uses words such as 'orderly', 'regular', and 'business' to describe Collins' proposal. These words make the proposal seem calculated, cold and artificial. It is more like a business contract, and is not based on feelings. When Collins addresses Mrs Bennet about speaking to Elizabeth alone, she becomes very excited, "Oh dear! - Yes - certainly!", whereas Elizabeth is agitated and wants to escape as she was 'vexed and embarrassed'. Collins' opening statement is simply flattery, but the way he just runs it out shows us that he has been practising. He tells her that he chose her out of her other sisters, which is a lie as he only chose Elizabeth after he realised that she may be married soon. ...read more.

His reasons for marriage are shallow and materialistic, and he wants to climb the social ladder by following Lady Catherine's wishes. Collins simply needs someone to marry him. He does not care about love or beauty. Thus, When he meets Charlotte Lucas, it is obvious they can satisfy each others needs because Collins needs a wife to present to Lady Catherine and Charlotte is in danger of becoming an old maid. Their contract of marriage was based on absolutely no physical attraction or true love. Their marriage could be classified as a typical marriage of the time. Their marriage was convenient. Charlotte is happy because she receives a home and secure social standing. Collins is pleased because he can go on about his duties to Lady Catherine. Elizabeth does not comprehend why someone would marry without any true love for his or her wife or husband. The most likely cause of her lack of understanding probably results from growing up in a household where her mother and father showed no affection whatsoever for each other. Elizabeth is mindful of her father's mistake in marrying her mother. The two had nothing in common with each other. ...read more.