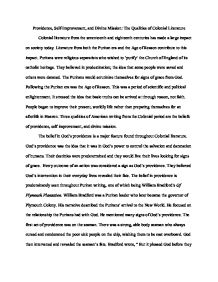 Colonial literature from the seventeenth and eighteenth centuries has made a large impact on society today. Literature from both the Puritan era and the Age of Reason contribute to this impact.

Providence, Self-Improvement, and Divine Mission: The Qualities of Colonial Literature Colonial literature from the seventeenth and eighteenth centuries has made a large impact on society today. Literature from both the Puritan era and the Age of Reason contribute to this impact. Puritans were religious separatists who wished to 'purify' the Church of England of its catholic heritage. They believed in predestination; the idea that some people were saved and others were damned. The Puritans would scrutinize themselves for signs of grace from God. Following the Puritan era was the Age of Reason. This was a period of scientific and political enlightenment. It stressed the idea that basic truths can be arrived at through reason, not faith. People began to improve their present, worldly life rather than preparing themselves for an afterlife in Heaven. Three qualities of American writing from the Colonial period are the beliefs of providence, self improvement, and divine mission. ...read more.

Another characteristic of Colonial literature is the idea of self-improvement. This idea is represented in both Puritan and the Age of Reason literature. It is the idea that people need to attain moral perfection. Benjamin Franklin, an autodidact of the Age of Reason, experimented with the idea of self-improvement. He found self-improvement to be a logical idea that every person should experience because it would better themselves and society. In his autobiography, Franklin wrote, "I concluded, at length, that the mere speculative conviction that it was our interest to be completely virtuous was not sufficient to prevent our slipping, and that the contrary habits must be broken, and good ones acquired and established, before we can have any dependence on a steady, uniform rectitude of conduct" (80). Franklin devised a method to help him become virtuous. He created a list of thirteen virtues and a plan to attain each one. ...read more.

Because of God's celestial powers, the belief in divine mission was widely used throughout Colonial literature. Colonial literature has influenced American history and society. The qualities of writing from the seventeenth and eighteenth centuries have contributed to this impact. The concept of divine mission is exemplified daily in classrooms across America when children stand and recite the Pledge of Allegiance every morning. They all say, "...one nation under God..." Also, the phrase "In God We Trust" is embossed on American currency and was adopted as our nation's motto. Even now America is viewed as a divinely guided nation. In addition, self-improvement is exercised in the education system. People try to fulfill their greatest potential by improving their knowledge. The public school system enables all individuals the right to an education that will precipitate to a more successful life. In higher education, scholarships are available to those who excel academically but cannot handle the financial obligation. It is clear that qualities of literature from the Puritan era and the Age of Reason are still relevant in today's American society. ...read more.