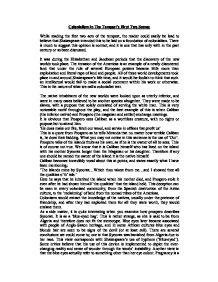 Colonialism in The Tempest's First Two Scenes While reading the first two acts of the tempest, the reader could easily be lead to believe that Shakespeare intended this to be laid

Colonialism in The Tempest's First Two Scenes While reading the first two acts of the tempest, the reader could easily be lead to believe that Shakespeare intended this to be laid on a foundation of colonialism. There is much to suggest this opinion is correct, and it is one that has only with in the past century or so been discussed. It was during the Elizabethan and Jacobean periods that the discovery of the new worlds took place. The invasion of the Americas is an example of a newly discovered land that under the rule of several European powers became little more than exploitation and literal rape of land and people. All of these world developments took place in and around Shakespeare's life time, and it would be foolish to think that such an intellectual would fail to make a social comment within his work or otherwise. This is the nature of what we call a colonialist text. The native inhabitants of the new worlds were looked upon as utterly inferior, and were in many cases believed to be another species altogether. They were made to be slaves, with a purpose that solely consisted of serving the white man. This is very noticeable motif throughout the play, and the best example of this is when Caliban (the inferior native) ...read more.

At the time the natives as saw it as a genuine offering of alliance when the settlers sat down at dinner and shared Turkey. It was not and shortly afterwards they slaughtered them, in the same cowardly way that Prospero caged his native. There is an elitist air to Prospero that is reflective of the general character of a European settler. This is representative within his language; on several occasions it is apparent that he and his daughter Miranda feel that their position and colour means they are superior to other characters. 'I pitied thee ... when thou didst not, savage, know thine own meaning, but wouldst gable like a thing most brutish.' This is just one example of how both Prospero and Miranda feel they are above Caliban in every way. 'I pitied thee' suggests that there is a definite feeling of Caliban's being little more than an animal, something that could just as well be disabled due to his form. When Miranda says 'gable like a thing most brutish' she is referring to Caliban's dialect before she honoured him with a civilised language. This does nothing for our esteem of Miranda. Her stalwart belief that any 'gabling' but that of her own tongue is wrong only shows her ignorance. ...read more.

These two slaves represent his overall control; we know he can conjure great storms and give or take life as he pleases. It is understandable why Caliban in particular may see the mage as a god like figure (as that is how he is presented for a large section of the play), and it is reflective of the awe that many natives felt when first laying eyes on the pale faces. They would swagger of their monstrous ships, with weapons and finery that would impress any man. The problem would come when it became apparent that the natives were quite impressionable and willing to learn. The manipulation that would follow could well stretch as far as to create a belief that the white man was god. It is not even as if this is a phenomenon that died with slavery. In the first half of the 20th century, black American school children were taught in class that they weren't important, and had no history worthy of teaching. The early settlers used this effectively as a smoke screen that would prevent any uprising or questioning of their rule. This is just what Prospero does, but he also employs a fear factor to enforce his power. I feel that throughout this play there is much to suggest that it is indeed a text with strong colonialist links, but it is not the only motif that can be extracted. ...read more.