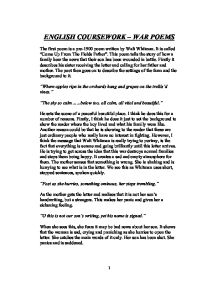 Come Up From The Fields Father and War Photographer

ENGLISH COURSEWORK - WAR POEMS The first poem is a pre-1900 poem written by Walt Whitman. It is called "Come Up From The Fields Father". This poem tells the story of how a family hear the news that their son has been wounded in battle. Firstly it describes his sister receiving the letter and calling for her father and mother. The poet then goes on to describe the settings of the farm and the background to it. "Where apples ripe in the orchards hang and grapes on the trellis'd vines." "The sky so calm......below too, all calm, all vital and beautiful." He sets the scene of a peaceful beautiful place. I think he does this for a number of reasons. Firstly, I think he does it just to set the background to show the reader where the boy lived and what his family were like. Another reason could be that he is showing to the reader that these are just ordinary people who really have no interest in fighting. However, I think the message that Walt Whitman is really trying to portray, is the fact that everything is serene and going brilliantly until this letter arrives. ...read more.

She wakes up during the night and in the last verse, the poet is suggesting that the woman would like to commit suicide, to be able to be with her son. She feels empty without him and would love to be with him. "O that she might withdraw unnoticed, silent from life, escape and withdraw, to follow, to seek, to be with her dead son" This poem plays on the emotions of the reader by showing how the mother reacts, and makes people feel sad and feel sorry for the mother, and it almost makes you imagine what it would be like if this terrible thing happened to you. In "War Photographer" by Carol Ann Duffy tells the story of a war photographer who has just returned from battle an is developing his photos in his darkroom. She uses alliteration in this poem. She uses the term; "Spools Of Suffering" , to refer to the rolls of film with all the dead, injured and suffering people on them. Some other alliteration she uses is "Solutions slop". This could also be onomatopoeia as it captures the sound of the solution in the tray that is used to develop the photos. ...read more.

This, again, deals with the emotional impact of the war on the families of victims and leaves them sad and also angry that their loved one has been taken. In the last verse, Carol Ann Duffy points out that the general public only care when they're looking at the pictures and it doesn't leave an emotional impact or an empty space in their lives, unlike the victims grieving families. They are able to get on with their normal lives right away. "The reader's eyeballs p***k with tears between the bath and pre-lunch beers" The photographer then goes back to doing his job and the general public forget about him until he comes back with the next set of photographs. "He stares impassively at where he earns his living and they do not care." Both of these poems deal with the emotional impact of war on the families of its victims. Although these poems are over seventy years apart, there isn't really any change in the way people react to loss. They are saddened, then cry, they are angry and like the mother, depressed. Both poems how hard it can be to get on with your life if someone close to you dies, but also, how easy it is if it doesn't affect you, just like the newspaper readers. By, Sean Mc Quade ?? ?? ?? ?? 1 ...read more.

When analysing two poems in a piece of work there has to be a common thread used to explore them or at least carefully made links throughout the analysis. These poems are looked at very much in isolation and therefore don't come together successfully to produce a cohesive essay.