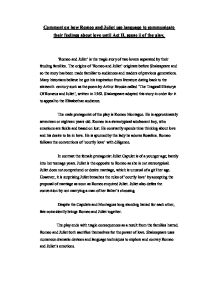 Comment on how Romeo and Juliet use language to communicate their feelings about love until Act II, scene ii of the play

Comment on how Romeo and Juliet use language to communicate their feelings about love until Act II, scene ii of the play. 'Romeo and Juliet' is the tragic story of two lovers separated by their feuding families. The origins of 'Romeo and Juliet' originate before Shakespeare and so the story has been made familiar to audiences and readers of previous generations. Many historians believe he got his inspiration from literature dating back to the sixteenth century such as the poem by Arthur Brooke called 'The Tragicall Historye Of Romeus and Iuliet', written in 1562. Shakespeare adapted this story in order for it to appeal to the Elizabethan audience. The male protagonist of the play is Romeo Montague. He is approximately seventeen or eighteen years old. Romeo is a stereotypical adolescent boy, who emotions are fickle and based on lust. He constantly spends time thinking about love and his desire to be in love. He is spurned by the lady he adores Rosaline. Romeo follows the conventions of 'courtly love' with diligence. In contrast the female protagonist Juliet Capulet is of a younger age; barely into her teenage years. Juliet is the opposite to Romeo as she is not stereotypical. Juliet does not comprehend or desire marriage, which is unusual of a girl her age. However, it is surprising Juliet breaches the rules of 'courtly love' by accepting the proposal of marriage as soon as Romeo enquired Juliet. Juliet also defies the convention by not marrying a man of her father's choosing. ...read more.

Romeo shows that he can not forget about his love and one can teach him to forget about his love. Juliet Capulet is a young girl living in the town of Verona. Juliet is probably around the age of fourteen or fifteen years of age. Ladies in Verona, by the ages of Juliet were often married and settled down with children. Juliet being the daughter of wealthy Capulet is no exception to this and is expected to marry. Juliet has hardly reached womanhood when she is expected to make a life changing decision Act I scene iii takes place in a room in the Capulets mansion. Lady Capulet breaks the news to Juliet about the idea of marriage. Lady Capulet says, "Marry, that 'marry' is the very theme I came to talk of". Juliet replies "it is a n honour that I dream of not" as she is very shocked by the idea as she still thinks she is too young. She is innocent and na�ve. Lady Capulet says to Juliet; "Here in Verona, ladies of esteem, are made already mothers; by my count" Lady Capulet is suggesting Juliet is being left behind as most ladies are married by now. Lady Capulet also uses persuasive adjectives like "valiant" to advertise Paris as being perfect and encourage her daughter to marry him. The nurse of Juliet also emphasizes Paris being perfect "He's a man of wax" Juliet hardly shows much emotion about married. ...read more.

Juliet impresses Romeo so much that he can not believe she is human. "For thou art As glorious to this night, being o'er my head, As is a winger messenger of heaven" Romeo expresses Juliet to have angel-like qualities, she is immortal, a perfect goddess. Romeo uses sibilance and a simile to make Juliet's voice sound like beautiful music to one's ears; "Like softest music to attending ears!" In the beginning Romeo is represented as a typical young man. His language is completed with drama and emotions. Juliet is opposite, her language is straightforward and shows her disinterest in marriage and love. Juliet experiences the most dramatic change in the play after meeting and falling in love with Romeo in act II, scene ii. Juliet displays a newly sexually awaken young woman. Her language is altered to display a likeness of Romeo's language which is constantly uses hyperboles and imagery to portray her intense emotions. Romeo is less of a dramatic change as he still remains a passionate young man. His feelings are more genuine love rather than lust. Romeo's feelings are intensified by reciprocate love. Romeo also uses imagery to show intense feelings and the endeavour to commit to Juliet. Throughout the play Shakespeare uses numerous language techniques to convey emotions and to show true passion between two teenagers. The play demonstrates to what extent people are prepared to do for the power of love. Tragic consequences at the end of the play lead to sad emotions which heightens the audience. 'Romeo and Juliet', a tragic story that teaches people the true meaning of love. ...read more.