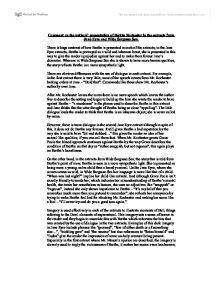 Comment on the authors presentation of Bertha Rochester in the extracts from Jane Eyre and Wide Sargasso Sea.

Comment on the authors' presentation of Bertha Rochester in the extracts from Jane Eyre and Wide Sargasso Sea. There is huge contrast of how Bertha is presented in each of the extracts; in the Jane Eyre extracts, Bertha is portrayed as a wild and inhuman beast, she is presented in this way to give the reader a prejudice against her and to make them favour Jane's character. Whereas in Wide Sargasso Sea she is shown to have more human qualities, the story reflects Bertha in a more sympathetic light. There are obvious differences with the use of dialogue in each extract. For example, in the first extract there is very little; most of the speech comes from Mr. Rochester barking orders at Jane - "Hold that". Commands like these show Mr. Rochester's authority over Jane. After Mr. Rochester leaves the room there is no more speech which leaves the author free to describe the setting and begin to build up the bias she wants the reader to have against Bertha - "a murderess" is the phrase used to describe Bertha in this extract and Jane thinks that the utter thought of Bertha being so close "appalling". ...read more.

Examples of this dark imagery in Jane Eyre include phrases like "groaned", "fear of either death or of something else...", "trickling gore" and "the maniac" but also references to "Satan himself" and "Judas" give the reader the impression of some un-holy creature being present. Especially in the first extract where Mr. Mason's injuries are described, the imagery is cleverly used to imply the viciousness of Bertha, it makes her seems even less human, to have been able to inflict such terrible injury. And in the second extract the imagery is used to emphasize her animal characteristics, for example - "...whether beast or human being, one could not, at first sight, tell..." which infers to the reader that Bertha is such a hideous beast that it is difficult to tell what she really is. However, in Wide Sargasso Sea the only imagery used to suggest and inhuman qualities in Bertha is when the two girls talk about seeing a "ghost", although, even this suggests humanity because ghosts are normally seen as human. Ironically, in this extract, unlike the other two, Grace Poole is noted to be more beastly than Bertha herself - "...but I hid it from your beastly eyes...", Bertha does not see herself as an ...read more.

For example, the second extract from Jane Eyre describes a "room without a window", with a "strong fender" and "a lamp suspended from the ceiling by a chain", this implies that Bertha is locked away and the fact that the fire is "guarded" suggests that Bertha is likely to hurt herself or someone else. The whole room is described like a prison further implicating Bertha as some crazy, untamed beast. However, there is, yet again, a great contrast in Wide Sargasso Sea. The only thing to suggest unpleasantness is the fact that Bertha says she feels "so cold". The rest of the description explains that she has a red dress and shoes that she is fond of telling us that she is in fact human after all, to have possessions shows her humanity. Bertha's mistrust is highlighted once more here, when she accuses Grace of hiding her "red dress" and how she hides the letter she wrote to her brother, Mr. Rochester - "It's all here, it's all here, but I hid it from your beastly eyes as I hide everything...". To sum up, the two authors' presentations of Bertha are very different. Reasons for this could be the change in thoughts towards mental health over the years but mainly it is the use of dialogue, imagery and setting that creates the contrast so well. ...read more.