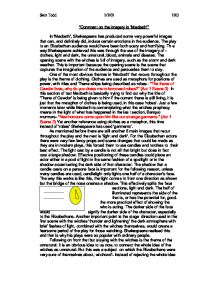 "Comment on the imagery in 'Macbeth'" In 'Macbeth', Shakespeare has produced some very powerful images that can, and definitely did, induce certain emotions in the audience. The play to an Elizabethan audience would have been both scary and horrifying. The way Shakespeare achieved this was through the use of the imagery of- clothes, light and dark, the unnatural, blood, animals and disease. The opening scene with the witches is full of imagery, such as the storm and dark weather. This is important because the opening scene is the scene that captures the imagination of the audience and persuades them to stay. One of the most obvious themes in 'Macbeth' that recurs throughout the play is the theme of clothing. Clothes are used as metaphors for positions of power, with titles and Thane-ships being described as robes- "The thane of Cawdor lives, why do you dress me in borrowed robes?" ...read more.

This effectively splits the face into two sections, light and dark. The half of the face that is I illuminated represents the side of the character that is, or has the potential for, good. It also has the more practical effect of showing the audience who is acting. The darker side of the face would signify the darker side of the character, especially to the Elizabethans. Another important point is the stage direction used in the first scene with the witches 'thunder and lightening' the dark atmosphere with brief flashes of light, combined with the witches themselves, would create a fearsome period of the play for those watching. Shakespeare realised this and that is why his plays were so popular with ordinary people. Following on from that but staying with the witches is the theme of the unnatural. It is an obvious idea to us now, to connect the whole idea of the witches as unnatural. ...read more.

In fact Malcolm urges Mac Duff to "make us a medicine of our great revenge, to cure this deadly grief" the deadly grief of course being Macbeth. Macbeth's thoughts on the sickness of Scotland were very much centred on a cure. This shows us his desperate need to be relieved of the constant worry and pressure to which he condemned his life, and by killing the king, his eternal soul. In conclusion, Shakespeare uses different images to give analogies, to put words to things that a normal person finds so hard to grasp. To do this he used metaphors such as clothes so that more people can understand and enjoy the play. For example, Macbeth needs the familiar feel of his last life instead of his new one "I have bought golden opinions of all sorts of people" Shakespeare expresses this by making Macbeth change into his old armour which represents his old warlike life. He does this to make his ideas more accessible to an audience of little understanding. Sam Todd 1/1/01 10G ...read more.