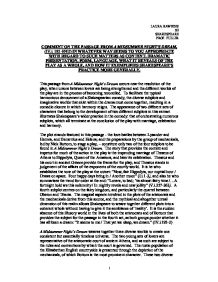 Comment On the Passage From a Midsummer Night&amp;#146;s Dream, In Whatever Way Seems To You Appropriate With Regard To Such Matters As Content, Dramatic Presentation, Form, Language, What It Reveals of the Play As a Whole, and How It Exemplifies Shakespeare&amp;

LAURA HAWKINS 2H SHAKESPEARE PROF. FULLER COMMENT ON THE PASSAGE FROM A MIDSUMMER NIGHT'S DREAM, (IV.i. 185-END) IN WHATEVER WAY SEEMS TO YOU APPROPRIATE WITH REGARD TO SUCH MATTERS AS CONTENT, DRAMATIC PRESENTATION, FORM, LANGUAGE, WHAT IT REVEALS OF THE PLAY AS A WHOLE, AND HOW IT EXEMPLIFIES SHAKESPEARE'S PRACTICE MORE GENERALLY. This passage from A Midsummer Night's Dream occurs near the resolution of the play, when unions between lovers are being strengthened and the different worlds of the play are in the process of becoming reconciled. To facilitate the typical harmonious denouement of a Shakespearian comedy, the diverse subplots and imaginative worlds that exist within the drama must come together, resulting in a comedic closure in which harmony reigns. The appearance of two different sets of characters that belong to the development of two different subplots in this extract illustrates Shakespeare's wider practice in the comedy: that of orchestrating numerous subplots, which all terminate at the conclusion of the play with marriage, celebration and harmony. The plot strands featured in this passage - the love battles between Lysander and Hermia, and Demetrius and Helena; and the preparations by the group of mechanicals, led by Nick Bottom, to stage a play, - constitute only two of the four subplots to be found in A Midsummer Night's Dream. The story that provides the context and impetus for much of the action in the play is the impending marriage of Theseus of Athens to Hippolyta, Queen of the Amazons, and later its celebration. ...read more.

As would be expected, the status of each character in society determines his mode of speech. Bottom, as a low-status character, speaks in prose, a form usually reserved by the playwright for those of a low social standing. Throughout A Midsummer Night's Dream, Bottom, along with his fellow mechanicals, has been established as a clown-like figure of fun. The incident with the a*s' head, for example, indicates that Bottom is a comically absurd character, with little intellect: "If I had enough wit to get out of this wood, I have enough to serve mine own turn", (III.i.141-3). His frequent use of nonsensical banter: "I pray you commend me to Mistress Squash, your mother, and to Master Peascod, your father" (III.i.178-9), ensures that he is portrayed as something of an idiot. It therefore comes as no surprise to the audience that his discourse, in which he seeks to make sense of the magical experience from which he has supposedly 'awoken', is muddled, confused and unfocused. The irrelevant references to the pageant due to be staged by the mechanicals: "When my cue comes, call me, and I will answer. My next is 'most fair Pyramus'." (IV.i) contrast to the composed, albeit slightly confused, responses of the young lovers, and compound Bottom's status as an unintelligent fool. Because he is uneducated Bottom tries, but fails, to articulate his feelings: "Methought I was - there is no man can tell what. Methought I was, and methought I had - but man is but a patched fool if he will offer to say what methought I had." ...read more.

The advantages of residing in the social world are made patent by setting exponents of this social world within an undomesticated and irresponsible fairy realm. In the comedic tradition, the stability that social institutions deliver is glorified. At the end of A Midsummer Night's Dream, all parties are seen to benefit from the institution of marriage; even the fairy king and queen, whose quarrel has lasted the entire length of the play, are reconciled at the end in a heterosexual harmony: "Now thou and I are new in amity," (IV.I.86). The conclusion of the play asserts man's concord with the world, and the neat union of different worlds: While these visions did appear; And this weak and idle theme, No more yielding but a dream A Midsummer Night's Dream challenges the audience's sense of imagination and perception by placing the intellectual and worldly realism of the court next to the mystical qualities of a fairy tale. It raises and explores the issues of love, reason, class, the place of art and the wisdom of social institutions, but ultimately Shakespeare leaves it to the audience to form their own judgements on these matters. The play carries a deep significance to man, as we are made to examine our own notions of truth and reality, notions that underpin all human interaction: The poet's eye, in a fine frenzy rolling, Doth glance from heaven to earth, from earth to heaven, And as imagination bodies forth The forms of things unknown, the poet's pen Turns them to shapes, and gives to airy nothing A local habitation and a name. (V.i.12-17). ...read more.