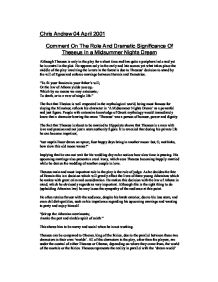 Chris Andrew 04 April 2001 Comment On The Role And Dramatic Significance Of Theseus In a Midsummer Nights Dream Although Theseus is only in the play for a short time and has quite a peripheral role and yet he is central in the plot. He appears only in the early and late scenes yet what takes place the middle of the play involving the lovers in the forest is due to Theseus' decision to stand by the will of Egeus and enforce marriage between Hermia and Demetrius. "To fit your fancies to your father's will; Or the law of Athens yields you up,- Which by no means we may extenuate,- To death, or to a vow of single life." ...read more.

Theseus main and most important role in the play is the role of judge. As he decides the fate of Hermia this is a decision which will greatly effect the lives of three young Athenians which he makes with great calm and consideration. He makes this decision with the law of Athens in mind, which he obviously regards as very important. Although this is the right thing to do (upholding Athenian law) he may loose the sympathy of the audience at this point. He often retains favour with the audience, despite his harsh exterior, due to his less stern, and even childish qualities, such as his impatience regarding his upcoming marriage and wanting to party and enjoy himself. ...read more.

He allows true love to prevail and overbears the wishes of Egeus. "Egeus, I will overbear your will; For in the temple, by and by, with us These couples shall be eternally knit" And laughs and jokes with the lovers during the wedding banquet. "Moonshine and Lion are left to bury the dead." "Ay, and Wall too." These points outline Theseus involvement, character and overall power and presence in 'A Midsummer Night's Dream' and display his overwhelming effect on the plot and presentation of the play. He is featured only in small portions of the play but significant throughout. He is a leader, judge, jury and friend to the lovers and without him the plot would fall apart at the seams. He is arguably the most important and influential character in the play. ...read more.