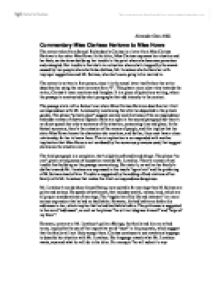 Alexander Chen A1SL Commentary Miss Clarissa Harlowe to Miss Howe The extract taken from Samuel Richardson's Clarissa is a letter from Miss Clarissa Harlowe to her sister Miss Howe. In the letter, Miss Clarissa expresses her situation and her feels, as she slows builds up her trouble to the point where she becomes powerless and entangled. Her trouble is that she's in a situation where she's trapped by the events caused by two people whom both she dislikes, Mr. Lovelace who bothers her with improper suggestions and Mr. Solmes, who she's soon going to be married to. The extract is written in first person, since it is the actual letter itself where the writer describes her using the most common form "I". This gives a more clear view towards the writer, Clarissa's inner emotions and thoughts. It is a piece of epistoltory writing, where the passage is constructed by short paragraphs that add intensity to the content. The passage starts with a factual tone where Miss Clarissa Harlowe describes her illicit correspondence with Mr. ...read more.

The politeness is suggested in the word "addresses", as well as the phrase "he will not disgrace himself" and "hope of my favor". However, contrary to Mr. Lovelace's polite offerings, the family and him are at bad terms, implied by the use of the imperative word "must" in his proposals, which suggest that the family will not likely accept them. Clarissa continues to use revelatory language to describe her situation with Mr. Lovelace. Her language reveals what Mr. Lovelace wants, says and what he will do in his letter. For example "he will submit to any measures that I shall prescribe, in order to bring about a reconciliation." Along with his polite offerings, Mr. Lovelace tries to show that he has no bad intentions by the suggestion of a meeting "attended by whom I please". Mr. Lovelace's suggestions are all improper, wild and impossible. Young women do not meet men at nighttime in some garden because reputation mattered. It was improper to offer her an asylum when she should be tyrannically treated and it was almost impossible for her friends to drive her into a foreign protection. ...read more.

The paradox between her being crowded by the idea of things and her being alone also strengthen the sense of entrapment. The demanding of advice from her sister suggests her alones and that she has to confide to someone not living there to seek her help. She sees love as entanglement, as she condemns the lover-like correspondence. The correspondence had caused the unhappy situation, "more and more entangled". She not only dislikes Mr. Lovelace, but also Mr. Solmes, as she mentions that she wants break off the marriage. She's eager to escape the entanglement and seeks to be free, shown by her wishing to "put an end to it". This is supported by the desperate tone she has, as she points clearly to her suffering by obvious words such as "unhappy. Her tone is also pessimistic, as she uses words such as "extricate", which has a negative meaning. My personal response is that her entanglement is very difficult to resolve since she's going to marry soon. If she breaks off the marriage, it would cause Mr. Solmes to misunderstand her that she accepts his improper suggestions. Her problem is tragic and inevitable to avoid. For that, I feel sorry for her. ...read more.