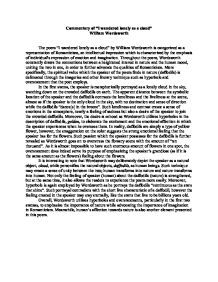 Commentary of &quot;I wandered lonely as a cloud&quot;.

Commentary of "I wandered lonely as a cloud" William Wordsworth The poem "I wandered lonely as a cloud" by William Wordsworth is categorized as a representation of Romanticism, an intellectual impression which is characterized by the emphasis of individual's expression of emotion and imagination. Throughout the poem, Wordsworth constantly draws the connections between a heightened interest in nature and the human mood, uniting the two in one, in order to further advocate the qualities of Romanticism. More specifically, the spiritual value which the speaker of the poem finds in nature (daffodils) is delineated through the imageries and other literary technique such as hyperbole and overstatement that the poet employs. ...read more.

Such loneliness and contrast create a sense of emotions in the atmosphere, nearly a feeling of sadness but also a desire of the speaker to join the crowded daffodils. Moreover, the desire is echoed as Wordsworth utilizes hyperboles in the description of daffodils, golden, to elaborate the excitement and the emotional affection in which the speaker experiences when he oversees them. In reality, daffodils are simply a type of yellow flower, however, the exaggeration on the color suggests the strong emotional feeling that the speaker has for the flowers. Such passion which the speaker possesses for the daffodils is further revealed as Wordsworth goes on to overstress the flowery scene with the amount of "ten thousand". ...read more.

Not only the feeling of speaker (human) about the daffodils (nature) is strengthened, but at the same time, it also allows the readers to experience the poem more easily. Moreover, hyperbole is again employed by Wordsworth as he portrays the daffodils "continuous as the stars that shine". Such portrayal contradicts with the short live characteristic of a daffodil, however the feeling created in the speaker may stay eternally, like the starts that live to be billions years old. Overall, Wordsworth utilizes hyperboles and overstatements, particularly in the first two stanzas, to emphasize the importance of nature while advocating the importance of imagination in Romanticism. Meanwhile, human's affection towards nature is also another element presented in this poem. ...read more.